Kevin Prince Is Making An Impression

Share All sharing options for: Kevin Prince Is Making An Impression

We now have 4 practices in the books and from the reports it seems like a clear leader emerging in the competition for starting QB position. Kevin Prince is making a solid impression so far at Spaulding Field: 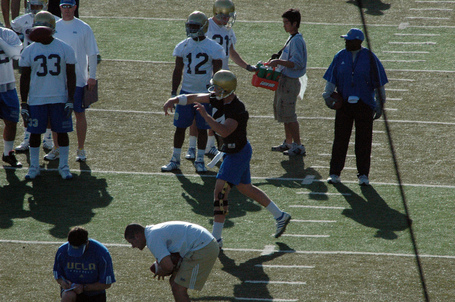 The LA Times reports that Prince has taken "the lead in UCLA's quarterback race." Prince got he larger share of reps with the first team on Monday:

"I think Kevin is deserving of the reps he's getting," Neuheisel said. "Brehaut is gaining and Craft probably deserves a little more."

The coach-speak will keep the quarterback derby in motion, but Prince was far ahead of the field judging by his performance Monday. He completed a wide range of passes, from dump-offs to deep patterns. More important to those doing the judging, he portrayed a starting quarterback with his actions.

"What I want to see is a confidence, that self-esteem, when a guy goes into huddle and projects that this next thing is going to work," Neuheisel said. "And he's done that."

He is also excited about Prince's arm strength:

Neuheisel also said that Prince has stood out because "Kevin has the strongest arm. Quite frankly, the ball jumps off his hand and it gets there. And he is as accurate as anybody on the field. We're making plays on throws that were not automatics last year."

Chow also seems pleased with what he is seeing from Prince:

Chow said he is excited about the way Prince is throwing the ball down the field, and his accuracy in the short passing game.

"He's really doing well," Chow said. "He needs to be a little quicker with his decisions, command the huddle (a little more). If he gets a guy that's not in the right spot, line him up right."

While coaches sound pleased with what they are seeing from Prince,  veteran team-mates such as Logan Paulsen is impressed with maturity Prince reportedly has been showing in the huddle:

"He's been a pleasant surprise," tight end Logan Paulsen said. "He's kind of a quiet guy, but when he gets in the huddle, he's all business. He commands respect in the huddle, which being a redshirt freshman, would be a concern. I'm impressed with his maturity."

Prince for his part knows he still has a lot to work on:

"I feel that it's gone pretty well so far," Prince said. "At the quarterback position, decision-making is something that can always improve. I think another mark of a great quarterback is consistency. I think with the routes and throwing to receivers, I think that's something that I need to continue to improve on."

Well all of these reports sound encouraging but remember we still have 11 more practices to go. I believe there will be a "conceptual scrimmage" (term used by CRN in the DN report) at the end of today's practice during which Prince, Brehaut and others will get to show their coaches what they have picked up in last few days.

As encouraging as these reports are we all need to be somewhat cautious and keep our excitement in check. I think it will still take time for Prince to develop the right rhythm in the short passing game. That will come with repetition over time: 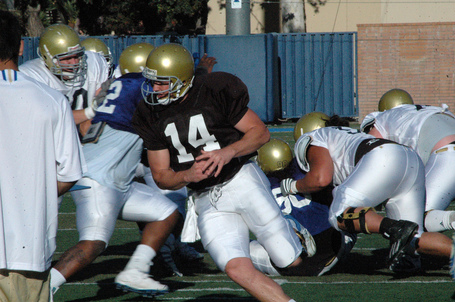 Not to mention there will be another period of adjustment when he gets into actual game situation (which he hasn't experienced since his first high school game in his senior year).