Heading into the middle of first full week of spring practice we have some minor injury related news to pass. Kevin Prince who has gotten off to a great start sat out part of yesterday's practice with a sore shoulder:

"It happened when we were doing individual routes with the receivers," said Prince, a redshirt freshman. "It wasn't sore when I woke up. I was a little tired (Monday), and Saturday I was a little tired after having gone three days straight of practicing. I'm thinking it's something that's going to heal up nicely just from all the throwing we've been doing."

No tests were immediately scheduled, and Bruins coach Rick Neuheisel wasn't sure of the severity of the injury.

"He just said it was real sore," Neuheisel said, "so I said rest it."

The Bruins are off today and resume practice Thursday. However, Prince missed an opportunity to showcase his strong arm during Tuesday's scrimmage session at the end of practice.

"I've fought through things much more painful than this," Prince said. "It's something that, even if the pain is still there … I don't have any problems playing through that."

I wouldn't advise to lose too much sleep over this. Keep in mind this kid is getting full work out with the first team for the first time in a while. So it's not a surprise for getting a little tired. I am assuming if the team's training personnell and coaches were really worried, they would have immediately taken him to the UCLA's medical facilities for tests.

Plus nothing wrong with Brehaut getting more workout with the first team: 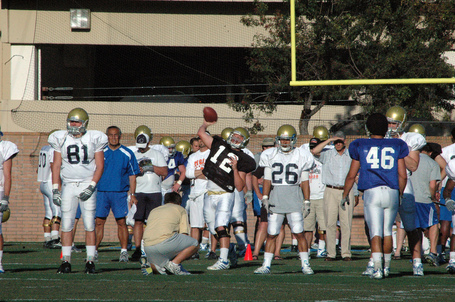 That brings me to making the point that I don't think anyone should be making any kind of conclusion about depth chart after 5 full practices. Brian Dohn last night posted a note about early RB depth chart order which goes along the line of 1) Ramirez, 2) Coleman, 3) Franklin/Moline, 5) Knox, 6) Carter, and 7) Dean.  Again, we have had only 5 practices in the book. I think while we all get very hopeful about young talent (with those cool youtube highlights from high school in our minds), we have to remember for these guys to get PT at UCLA, they will have to earn the trust of the seasoned offensive coaching staff who are going to put a premium on fundamentals and BLOCKING.

I think Moline gets a lot of time because he is one of the best blocker in our backfielf. I hope Dean, Knox and other RBs put a lot of time focusing on blocking fundamentals because Lord knows how important it is to provide all the protection we can give to our young QBs next season. Anyway, I just wouldn't worry all that much about depth charts at RB or any other positions and think about roster decisions about who is going to RS or who is going to play based after 5 practices in spring football. It's way too early.

In another interesting note Dohn writes about something I had been wondering for a while. We have been reading about how number of UCLA players have gained weight through hard workouts this season. I was wondering how speed of defensive athlets like Carter and Ayers would be impacted by their added weight. Here is Carter in the DN today:

"I was kind of light last season," Carter said. "As soon as we lost that last game in December, I took a day off and I was back in the gym Monday. I went to New York for avacation and even took out agym membership so I could still work out."

Carter said the weight gain hasn't slowed him down.

"I feel quicker," Carter said. "Actually, I feel a little faster. I was doing a lot of stuff to get my legs stronger. I feel quicker, and I feel good."

Here is to Carter and his team-mates staying healthy through rest of spring practice: 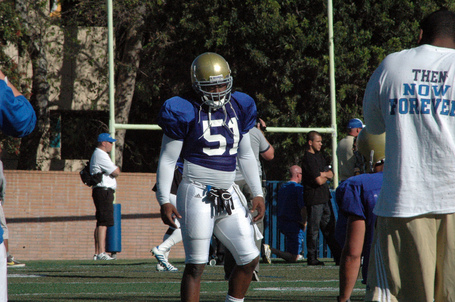 BTW if you haven't done it make sure to read Ted Miller's closeup of Reggie Carter  flagged by bucknellbruin yesterday. Great story about where this Bruins gets his inspiration every day.

Carter and his team-mates get back out on Spaulding around 4 pm PST today. Again considering heading out there and share with us (especially those who are in exile) your impressions/notes. These practices are all open to public and they last about two hours. No better way to enjoy a beautiful Southern California afternoon in beautiful UCLA.