So looks like its been a pretty fun day here on BN. Not sure how much more I can add to the overwhelmingly positive feedback we have seen to Menelaus' last post here on BN and also around the internets. I mean those guys hit a grand slam in their first at bat.

I also want to reiterate our gratitude to CRN and the officials at UCLA athletics department for making this happened. I fully agree with Bellerophon that this has the potential to be a "real watershed moment for sports blogging in general" as it will hopefully encourage athletic departments from other major D I programs to become more receptive to overtures from bloggers diligently covering their team. This is a point that I have already seen made by our SBN colleagues covering ASU and CRN's old team Colorado.

Going back to our interview, I can tell you as one of the lucky ones who have seen the entire transcript that tomorrow's part 2 is going to be just as good. It will go up around 9 am EST.

Meanwhile, practice is going on at Spaulding Field where Brehaut is doing everything he can to make the most out of any additional playing time: 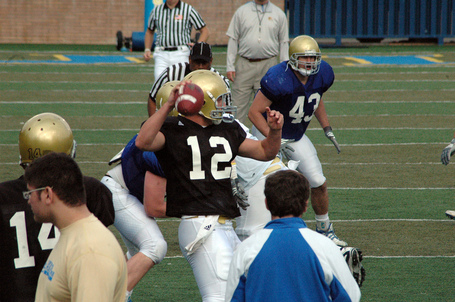 Yes, the kid is going through expected growing pains (he is not even a true freshman). But CRN is encouraged:

"I knew (Brehaut) was going to be submerged when he came in,'' UCLA coach Rick Neuheisel said. "What I was hoping for was that it would roll off his back, and that he can take criticism, roll back in there and come back and make a good play.
"The mistakes are far from over with him, but he does have the proclivity to learn and to make some plays. So, I think we have ourselves a pretty good player there."

Meanwhile, he and his coaches are also hard at work shaping the OL who are trying to show their coaches the results of their hard work during the off season: 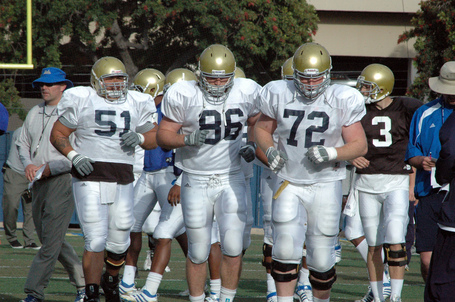 Of course that's Paulsen in the middle with Maivia to his right (51) and Sheller to his left (72). More from CRN on his impressions on Maivian, Sheller and rest of our frontline:

"I think (JUCO transfer) Ryan Taylor is going to be a good player,'' he said. "I think that Jeff Baca is going to be a good inside player. And I think that (Colorado transfer) Kai Maiava, as he learns, will become a steady guy inside.
"We still need more from (Nate) Chandler, still need more from (Micah) Kia. Not that I'm down on them, I just think we can get more out of them. They're athletic enough to be better than they're performing right now. And then I also am very enchanted with (Sean) Sheller, with the way that he's working. We're developing, and you know what, Sonny Tevaga has done some nice things."

Again to check out those guys get out in the practice field. Given how Neuheisel is reaching out to this community I think we should do our part to gin up excitement and take the palpable buzz around our football program to whole another level in Westwood. Again Part II comes out around 9 am EST tomorrow.