Here is the official release from UCLA:

"After speaking with my parents and with Coach (Ben) Howland and the coaching staff, I feel that it is in my best interest to test the waters and see where I land in the NBA draft," Holiday said. "I'm taking this opportunity now so that I can keep my eligibility and keep my options open. I'm not signing with an agent."

"I really enjoyed my first year at UCLA, being part of such a historic program," Holiday added. "I have a great connection with my coaching staff and love all my teammates, so I couldn't ask for anything more."

Coach Howland as usual is being graciously supportive and rooting for JH to pursue his dream:

"There's no question that Jrue (Holiday) is a first-round NBA Draft pick," Howland said." He's very excited about his opportunity to be an NBA player and I'm 100 percent behind him and proud of him. We are very happy for both Jrue and his family."

Dohn was at the press conference (BTW why did JH had to call a press conference to announce a decision that wasn't any kind of "news"?) earlier today where he got the following intel from Howland and JH's Dad:

In talking to UCLA coach Ben Howland and Jrue Holiday's father, Shawn, the feedback Holiday is getting from the NBA is he will be drafted anywhere between No. 10 and No. 20 in the draft.
He can begin working out for NBA teams April 30, and plans to go to the pre-draft camp May 27-31.
Shawn Holiday said one of the overwhelming factors in declaring for the draft was how former UCLA standout Russell Westbrook saw his stock increase during workouts last season. Like Holiday, Westbrook spent his final season at UCLA playing off-guard, but was drafted to be a point guard.

And here is one of JH's deciding factors in deciding whether to stay or go:

"If I can go in the lottery this year, I think I'm going to stay in and try it," Holiday said.

Again the regular readers here should know by now that he has till June 15 to make up his mind. I am not going to hold my breath and I strongly encourage everyone else not to hold theirs either. I fully expect him to do well in these workouts and then some NBA team to take a chance on him based on his "potential."

What I wish though that we didn't have to go through what I really think is a charade of "testing waters" when it comes to JH. Let's be frank. The kid wants to go to NBA NOW. Again from reading tealeaves all season and his time here it was always going to be "one and done" for him. Hey, that's fine. I wish the kid luck. But I think he owes the head coach that gave him an opportunity to wear one of the most celebrated uniforms in college sport, the courtesy to not string him or UCLA around for a long time putting him and his staff in a tenuous situation scrambling near the deadline.

While I am sure JH and his advisers will make the decision that is in his best interest, it would be nice if they also think about taking into consideration making a decision that would facilitate the transition for Coach Howland and UCLA basketball program as much as practicable.

Knowing Howland and his staff, I am sure they have a plan in place. In fact, now more than ever it makes sense why Howland gave JA all the backup mins to DC, because he knew all along that JH was going to be gone. So, it would be good for everyone involved to get to the final decision soon and move on.

I wish JH best of luck and I will always be grateful for some of the great moments in his freshman season: 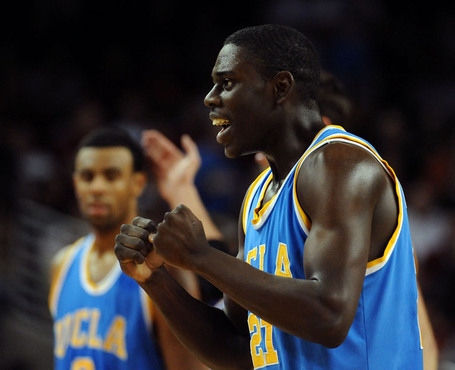 I remember his tough game against Southern Cal earlier this season ... but ... never mind ... we have hashed that out enough times here on BN.

I think we always have to remember how it is all about the four letters. Those four letters will always be more important than any individual no matter how great they are in their respective sports.

In my mind I am expecting to follow a UCLA team in 2010-11 that is going to be led by two talented guards - JA and ML - in the backcourt. I can't wait for to follow a group of kids who are going to commit themselves to having a kind of off season that will enable to physically develop and mentally mature Ben Ball warriors, who are going to totally buy into Howland philsophy of defense and rebounding first, and most importantly who are going to cherish every part of being a Bruin.

UPDATE (N): Some interesting comments from Howland re. his recruiting approach in next few weeks while JH makes his decision:

Underclassmen have until 10 days before the June 25 draft to withdraw and remain eligible for NCAA play, so long as they don't hire an agent.

That leaves the Bruins waiting to see if they will have an open scholarship. Howland said his returning players -- as well as incoming recruits Tyler Honeycutt and Mike Moser -- can fill the backcourt and the wing, so he does not plan to "sign someone just to be a body."

That makes me feel a lot better. I would hate for him to go out and waste a scholarship in desperation (cough*Ryan Walcott*cough). As I have maintained all along, with or without JH UCLA is going to be all right. I don't see us competing for the conference title. However, I do a see a team that will be developing into a place where it is going to be well set up for hopefully what will be a great 10-11 season. GO BRUINS.

UPDATE II (N): Per the DN piece today, JH is going to stay enrolled in classes through this "process":

Holiday will remain enrolled in classes and work out near his home in Chatsworth and also at UCLA. He can't begin working out for NBA teams until April 30.

"It's not like I'm going to the NBA. I haven't signed with an agent," Holiday said. "It's just testing the waters, to see what it's going to be like at these camps, at these workouts, if I can handle the drills, which I'm positive that I can, and I feel really comfortable going in."

And more from Howland on roster management when should Holiday jumps:

Interesting note about both ML and MR being used at point. That could be kind of fun to watch.

Going back to JH another point before I end this update. I don't really get this RW comparison with JH. May be it's just me but I never really saw any similarities between RW and JH's game. RW committed himself to DEFENSE FIRST just like AA. Everything started with DEFENSE for RW. I never got that sense from JH this season on a consistent basis. Yeah, he had some good defensive efforts here and there but it never reached the level of RW or AA.

Moreover, I find it interesting the Holidays thing JH can just enter the draft and "blow up" like RW did last year. Uhm, RW didn't blow up out of out blue and rocketed up the draft charts last season. He was BLOWING up his his entire sophomore season, giving incredibly consistent effort game after game. He had worked his rear end off the entire off season between his first year and the second one, and the results showed as he made himself into a Ben Ball legend. I am sorry to say but I didn't see that from JH. Perhaps if he comes we will get to see it next season (as he will be playing lot of point). But right now I don't see any similarities between RW and JH either in their style of play or the way committed themselves to defense like Ben Ball warriors are supposed to do. GO BRUINS.