So let's start today's round up with a note on DC and PAA. Ever the team leader DC is talking up his fellow Ben Ball warrior - PAA - for the upcoming NBA draft:

I know a lot of people are wondering if former UCLA center Alfred Aboya will get a chance to play in the NBA, and his former teammate, Darren Collison thinks it could happen.
"I think he's going to impress a lot of teams,'' Collison said. "He has some versatility and he can make the 15 foot jump shot. And with how hard he plays --that's what the NBA is looking for, how hard you play -- I think he can play."

That's what I call providing leadership and sticking up for team-mates (instead of throwing them under the bus) on and off the court. We continue to see examples why Coach Howland decided to stick with one of the greatest Bruins ever at the 1 spot all season.

The kid who is hopping to fill PAA's big shoes - DG - is having a busy off season. From UCLA's official "blog" DG is set to take part in U-19 national team trials:

UCLA sophomore Drew Gordon is one of four returning USA Basketball veterans among 17 of the nation's most talented 19-and-younger basketball players who have been selected to attend the 2009 USA U19 National Team Trials, held June 16-18 at the U.S. Olympic Training Center in Colorado Springs, Colo. The athletes, born on or after Jan. 1, 1990, will compete for one of 12 roster spots on the 2009 USA U19 World Championship Team. The trials invitations were extended by the USA Basketball Men's Junior National Team Committee, chaired by NCAA representative Jim Boeheim (head coach, Syracuse University).

Following the trials, the USA Basketball Men's Junior National Team Committee is expected to announce finalists for the 12-member USA U19 World Championship Team roster. Training camp for the selected finalists will begin June 19, with the 12-member USA roster being announced prior to the teams' departure for New Zealand on June 25.

Gordon played on the 2007 Youth Developmental Festival Red Team that finished 5-0 and captured the gold medal and the 2008 USA Junior Select Team that defeated the World Select Team 98-78 in the 2008 Nike Hoop Summit.

Good luck to DG. Let's hope he has a healthy and productive off season. Camps like this should help him work on his low post skills (which are still kind of raw). If he comes in a little more developed and we get JMM to get in better shape this summer, it would be a solid off season for the Bruin front court. Can't wait to see these kids come back in Pauley next year.

Moving on to football, the Trojan Times' Adam Rose actually penned an interesting note on UCLA football (while sharing a detail on his alma mater U$C*):

If you heard that USC led the Pac-10 with about $6.5 million in TV revenue from football last year, you would probably yawn and go back to reading Pete Carroll's tweets from the middle of yesterday's 5K.

What's more interesting is that UCLA, with a 4-8 record and no bowl game, raked in $4.9 million -- good for second in the conference. And that Washington, at 0-12, was fourth with $4.7 million. One simple explanation is that the Bruins and Huskies are in two of the nation's largest media markets, though Stanford, Cal and Arizona State didn't seem to get as significant of a boost.

I am pretty sure a little detail like that will not be lost on CRN and his staff. It's yet another data point on the potential of UCLA football program. If CRN continues to build on the recruiting successes from last two years (I am not all that worried about the slow start unlike the typical nervous nellies on the message boards) ad puts together a respectable season, he will continue to have to get back where it was prior to Toledo's waning years, competing for conference (and even naitonal) championships.

Lastly, phew. Huge freaking win for the Lakers. However, I must say I am having a hard time disliking Denver: 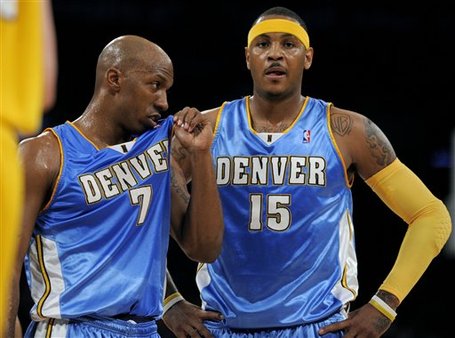 Looking at those jerseys (which BTW is a result of brainstorming of Bruin great Kiki Vandeweghe) often lose track on which team I am supposed to be rooting for. Anyone having similar issues?

Alright one more note. Rye is going to be posting his season review of the UCLA baseball program today around noon EST. If I were you, I'd make sure to drop a note in the comment thread thanking him for his incredible blogging efforts to talk up UCLA baseball. I hope our entire baseball program and Morgan Center knows what they have in rye. I am not sure if there has been any other individual in this country (and I am not embellishing) who has done more online to promote UCLA baseball and increase the profile of our program.

I know I appreciate what we have in rye here on BN. He is a gem. I hope all the regular readers and members of this community would let him know that by thanking him when his post goes up.