Bumped. The details below should be enough to get you fired up other events during UCLA coach's tour scheduled around the country rest of this season. However, open bat for $20. WOW. The next event is scheduled for May 12th in LA where both CRN and CBH are scheduled to speak. Check out the details here. GO BRUINS. - N

As has been mentioned a handful of times here on Bruins Nation, Coach Howland spoke in San Francisco at an event for UCLA alumni last night. It proved to be a really exciting and revealing night, as Coach Howland mingled with the fans beforehand, gave a glimpse into next year's squad (with his usual detailed use of statistics) and a sneak peek into the Pauley renovation project. I’ll try and include as many details as I can about what he spoke about, but forgive me if I leave some things out. There was an open bar, after all. 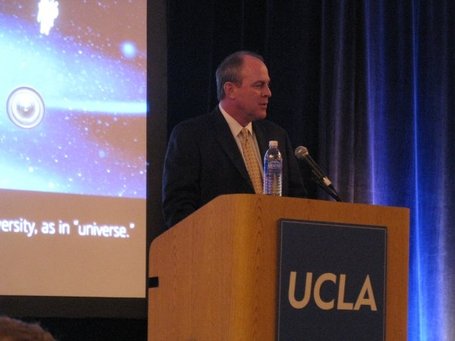 Overall, it was a really fantastic event. It was hosted at the Hyatt Regency on the Embarcadero, and there were probably around 300-350 people there. At 6, there was a reception with all sorts of appetizers, cheeses, and the aforementioned open bar. I just recently graduated last June, so this was pretty much the first alumni event I’ve attended, and it was just an awesome experience being able to meet so many local Bruin alums. There was a good mix of class years amongst the attendees, as well.

At around 6:30, my friend and I noticed that Coach Howland was there, mingling with some of the attendees. I’m not sure when he actually arrived, but it was great seeing him talking with the alumni. I got to meet him right before he spoke, and he was an incredibly gracious, humble person. I kept on trying to thank him for everything he’s done for UCLA, and he constantly thanked me back for attending and my support. It was a very cool experience. We even got to reminisce with him about our favorite Bruin donors, Dick and Trish Grey (I apologize if I messed up their names, but they sit in the front row right in front of the Den, 3 or 4 seats to the right of the announcers). This was the first time I’ve ever personally met him, and I got a great impression from him. Definitely proud to have him running our program.

A little before 7, we all headed into the ballroom next door to begin the program. It started with a 5-minute video regarding the Pauley renovation (I think this was the same video that was shown during the men’s basketball banquet a few weeks ago, although I’m not positive about that). Overall, I was very impressed with the video and the plans. I know you all have debated different possible ideas ad nauseum here at Bruins Nation, and perhaps may not be completely satisfied with the plans, but I was very impressed. The video included quite a few interviews with former athletes who have played in Pauley, not just basketball players, as well as Coach Howland, AD Guerrero and, of course, Coach Wooden.

The basics of the renovation plan: The one thing that looked drastically different was the facade. The outer shell of the new Pauley will have some very nice looking glass windows around the entire perimeter. Within the glass walls, there will be a wide concourse/walking area where people can congregate. In addition, of course, the concessions and restrooms will be totally revamped (this drew the biggest applause of the entire night). As for the seats, the court will be centered, with addtional on either end of the court. There did not appear to be any change to the 300 seating, which I know has been one major complaint. Overall, however, the impression given off by the video was a very positive one. The goal is to maintain the history and legacy of Pauley Pavilion, but modernize it for the 21st century and create a flashy, elegant building that will attract recruits even moreso. I was certainly impressed, although I was very strongly against tearing down Pauley and/or completely rebuilding a new arena.

After an introduction by a local Alumni Association Director, Coach Howland took the stage for what turned into about a 30 minute speech and Q&A session. I’ll do my best to touch on the different points he made.

He started out lauding the three graduation seniors. You really get the feeling that Howland absolutely loves these kids. (The upcoming notes will be summaries of Howland’s words, not mine.) Aboya, he noted, graduated in 3 years and is currently getting ready for the NBA Draft, where he has a chance to sneak into the second round. With regards to Darren, during a Q&A later on, he called Collison an incredibly loyal Bruin (a thinly veiled jab at Jrue, intentionally or not); he had the chance to leave after his sophomore year, and again after his junior year, but decided to stick it out. And finally, Josh, who had to fight through all sorts of hip injuires/rehab/one redshirt year to really have an excellent career as a Bruin. I apologize, because I know I’m omitting a lot of what he said with regards to those 3 great Bruins.

Most of the time, he spent breaking down our chances for next year. Being an eternal optimist, he effusively praised all of our returning players and incoming freshmen. The gist is that everyone is doing an excellent job in their offseason training programs. James Keefe, who he noted had an excellent finish to his sophomore season, but a somewhat frustrating junior season, will certainly be an improved player next year. He also has high hopes for Bobo, who does have excellent hands and can put the ball in the hoop, "which is always important." Jerime Anderson, a guy who didn’t play much last year, will also be a strong player next year, although there will certainly be growing pains as he gets used to playing more minutes, likely in a starting role. Finally, he lavished massive praise at Malcolm Lee, noting his massive wing span and huge build. The most exciting thing he mentioned regarding Lee, that many of you here have commented on, is his defensive abilities. He has the capabilities, according to Howland, of being as good of a defender, if not better, as Afflalo or Westbrook. WOW.

He then moved on to the incoming freshmen, where there was a pretty common trend amongst 4 of the 5 incoming guys: INCREDIBLY SKINNY. Every time he listed the heights and weights of the incoming guys, everyone laughed a little bit. A little time in the weight room will do wonders for these guys, as many of them have massive wing spans and excellent potential. Again, I’m forgetting a lot of the details wrt each individual player, but needless to say he’s very excited about our prospects.

He also mentioned our season last year, how he was overall very satisfied with the results. All things considered: we lost 3 guys, two of whom were on the All-Rookie team, and the third started half of the games with Milwaukee. We had become a little spoiled with the amazing success during the three years prior. Howland offered an interesting anecdote at this point: he always said he would trade all 3 Final Fours for one national championship, then mentioned a conversation he had with Tom Izzo that helped to put things into perspective. Izzo, who also made 3 staright Final Fours with MSU back in the early 00’s, really put things into perspective, showing how incredibly difficult it is to make it to even one Final Four, and how lucky we are with our recent successes. With all of that said, however, Howland strongly stressed that he came to UCLA to win a national championship.

Another interesting anecdote regarding our seeding: as many of you know, Dan Guerrero was on the selection committee, which many people (including Lavin during an ABC broadcast this season) thought would certainly help us. Yet as Howland noted, every time UCLA was mentioned, Guerrero had to leave the room, which ended up hurting us in the end. Nonetheless, he tipped his hat to Villanova. Comparing this season to last year, he said that "last year we seemed to be getting all the calls in the world; this season, everything seemed to go against us." He did not use that as an excuse, although when he mentioned the Darren Collison charge/block at ASU, the crowd groaned and booed.

And the Q&A: (paraphrased)

Q: Who do you think will be our starting center next year, with so many players, from Keefe to Drago to Stover to Bobo competing for it?
A: Exactly. (which drew quite a few laughs).

Q: It’s been said that UCLA, after Stanford, has the second hardest admission requirements in the Pac-10. Your thoughts?
A: It’s an honor, and there is no conference in the nation with three universities as prestigious as UCLA, Cal and Stanford. Ultimately, it is good for the program, because it brings in truly smart kids who can handle the academic rigor and excel, on and off the court. But I can’t comment on exactly what Cal does or does not do.

Q: Many people have commented on your curious strategy with regards to time outs (which drew a huge laugh). What influences your time out strategy?
A: I prefer to coach when I have the lead. So I take time outs to ensure that, to keep everyone sharp. In addition, the first timeout of every half is a full TV timeout, although it is only charged as a 30 second timeout. This allows us to stay even sharper. So much of our energy is used up on defense, that I use time outs largely to rest our guys so that they can be as sharp as possible on the defensive end (He also mentioned earlier that the primary flaw of our team this year was subpar defense, even though we shot the ball very well).

Q: When will we finally be breaking ground on the Pauley renovation?
A: January 2010. (At this point, Howland was pretty abruptly cut off by the host of the event, who seemed to be one of the main guys in charge of the fund raising, and said that more details will be announced next Monday at the official unveiling).

Overall, it was an excellent event. Before and after Howland spoke, there was a strong push towards fund raising for the Pauley Renovation project, which was certainly one of the primary reasons this event was held. Yet it was an excellent event, bringing together Bruins of all ages, and it makes me proud to have Coach Howland leading our program, and extremely excited for the upcoming season.