My apologies to all the non Laker fans here on BN but I have no choice. Last night's NBA final was one of those games that will be etched in our brains (especially if the Lakers take care of business rest of the way). Not sure how many of you were following it on twitter but we had some great back and forth with some our members/lurkers here on BN. If you want to get a sense of how so many of us are attached to the Lakers, I present you the head coach of UCLA basketball program tweeting right before the game:

Looking forward to watching Trevor and Jordan tonight. I guess it's obvious who I'm rooting for... I want to see some big rings this summer!

Coach Howland ended the night with this:

Trevor was a huge part of the Lakers win tonight! Bruin fans should be proud. What a great game. I love this time of year in the NBA.

Again what an awesome game Watching the Lakers in crunch time last night was bringing up the memories of those teams under AA and JF's leadership. The Lakers were absolute warriors down the stretch, not backing down and imposing their will on the Magic, who wilted under pressure. Anyways, looking forward to next game. We just might be tweeting during it for good mojo. So once again if you haven't done it, you can follow us on twitter over here.

Staying with Ben Ball, Eamonn Brennan over at Yahoo! Sports Blog has a great post on DC. Eamonn writes about how DC was the poster boy of a great college point guard and about how much we are going to miss him next season:

He wasn't the fastest player, but he was able to create his own shot. He was able to get to the rim. And he faciliated everything. He was just very solid. It's an overused word, but it describes Collison's offensive role to a T.

Collison truly starred on defense. He was unshakeable. Through a mix of body control, quickness, and great fundamentals (Collison seemed to get more mileage out of his defensive shuffle than anyone I can remember) he was perhaps the country's best perimeter defender.

He might lack a certain brand of quickness required to guard the elite NBA point guards -- it's easy to imagine Derrick Rose and Rajon Rondo getting to the hoop at will -- but as a four-year collegiate point guard, it's hard to do much better than Darren Collison. UCLA will miss him in ways both obvious and sublime.

Moving over to football. We have an amusing note out of Idaho. Yes, Idaho.  Apparently some ignorant writer on ESPN named Graham Watson (who writes in WWL's "College Football Nation" blog) posted the following wrt to whcih team has the easiest non conference schedule among schools from non-automatic qualifying conferences. So he took this lame shot against UCLA when writing about San Diego State:

San Diego State: The Aztecs are another team that needs a little confidence in the nonconference season, especially with a brutal Mountain West schedule. SDSU's nonconference schedule features four teams that finished at or near the bottom of their respective conferences and none of their opponents won more than four games last season. Even though UCLA is on the slate, Idaho might be the toughest game on the schedule.

LOL. No need to clown him over here. Our friend Kevan Lee over at One Bronco Nation Under God (SBN's Boise State blog) effectively destroyed this "crazy person" Watson:

So let me get this straight: Even though a 4-8 Pac-10 team is on the slate, a 2-10 WAC team might be the toughest game on the schedule? And not just any 2-10 WAC team, but the worst team in college football over the past half decade or more?

(Now might be a good time to point out that in the same story, Watson listed Boise State as having the fifth easiest non-conference schedule among non-BCS schools, completely forgetting that the Broncos had to visit Tulsa. This was a couple paragraphs after she listed New Mexico State as an easy non-conference game for the Vandals. Duly noted. The errors have been added to the Graham Watson Comedy of Errors page.)

Maybe Idaho is better than I think.

Read Kevan's complete take down of this moran over here.

We will stay with football and end the note with this: a picture of Coach Rick Neuheisel with fellow sweater vester Jim Tressell during their trip to the Middle East: 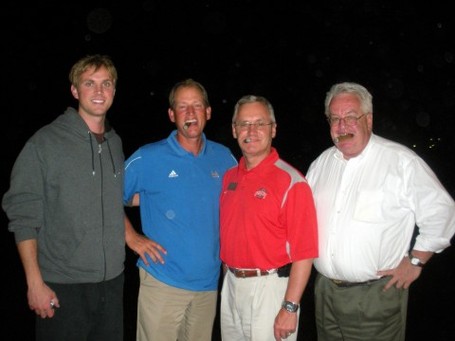 There are more pictures from that trip over here. Thanks to our readers for sending us the link.