Recommendation For Darren Collison: One Of The Greatest Bruins Of All Time

Share All sharing options for: Recommendation For Darren Collison: One Of The Greatest Bruins Of All Time

So couple of days ago we received an email from JakeTheSnake - our SBN college from Washington Wizards blog BulletsForever - about DC. Jake wrote to us:

As the NBA Draft gets closer and closer, there's several players who are flying under the radar that deserve more attention because they could be steals at the end of the first or the second round for whoever grabs them.  One of the players that's come up repeatedly in our draft discussions as someone who could fit this mold is Darren Collison.  I was curious as to whether or not you'd be up to answering a few questions to help us get a better feel for what he brings to the table.

Well I will be frank. Over the years we have gotten a lot of emails like this from bloggers around the country asking our opinion of players (or teams) from UCLA. We used to do this Q&A all the time in our early years on BN. However, we stopped doing them in last couple of years for couple of reasons: 1) time issue and 2) we have so much content here we asked folks that they could easily use the search function to look up our thoughts on particular player, coach or team from UCLA. However, when we got this request for DC, we couldn't resist.

If there was ever a UCLA basketball player, that deserves an all out recommendation from the greater Bruin Nation, he is none other than DC.  Here are our responses to few questions Jake from Bullets Forever asked about DC.

1. In what areas do you think Collison will be able to contribute right away on an NBA team?

Whoever is fortunate enough to draft Collison will be getting a prototypical basketball warrior coached by Ben Howland at UCLA (we call this type of players "Ben Ball Warriors" in Bruins Nation). DC’s key attribute as he has mentioned number of times during this NBA draft season is his defense and he is multidimensional when it comes to his defensive skills. He is as good as anyone when it comes to putting on a full court press, while at the same time he has been as good as any other guard in the Pac-10 conference (and the country) when it comes to playing man to man defense in a half court setting (by the way at UCLA, players don’t get to play zone under Howland who hates playing zone and considers it a weak form of defense).

As good as DC is defensively, we think the key contribution he will make right away to any team he gets drafted is his unquestioned intensity and work ethic practice that will push his teammates to get better even as he's adjusting to the pro game. His track record in Westwood in that area speaks for itself as he relentlessly worked his rear end of every day in practices to improve his game individually while making his team better in the process.

2. There's no question in anyone's mind that Collison would've been drafted in 2008 and 2007 had he chosen to make the leap.  What did he gain by staying at UCLA each of the last two years?

Leadership. You are right. There is no question DC would have been drafted in first round if he had made the leap in last two years, however as DC will tell you he probably gained some invaluable experiences in terms of being able to lead a talented team that you can’t really quantify. Keep in mind when DC came into UCLA as a freshman he was not exactly a hyped recruit such as Jrue Holiday (who never lived up to his Ungodly hype that accompanied him in high school). He was a three star recruit who at the time was passed on by programs such as Arizona. Then when he came in, he became a member of a basketball team which was being led by superstars such as Arron Afflalo and Jordan Farmar. While DC made significant contributions in his first two years at UCLA in teams that went to consecutive Final-4s, it wasn’t until Afflalo’s departure he got to step up as one of the team leaders.

If you want specific example of instances during when he carried the team on his back to significant victories just take a look at the highlights from UCLA-Stanford game in the final of the Pac-10 tournament when he simply dominated over a team with the Lopez twins, while other super star Kevin Love was hurting with a back injury.

He also developed as a leader not just by taking over during games, making clutch FTs, or clutch defensive stands (like he made against Eric  Maynor of VCU in the first round of this year’s NCAA tournament), he exemplified true leadership through all out hustle on the floor: 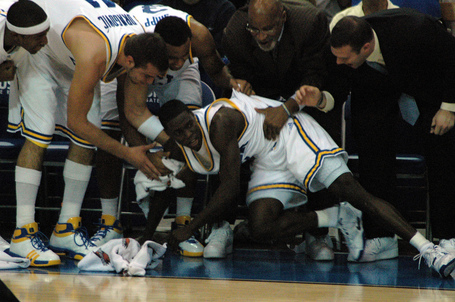 That was him diving and crashing the floor, , going after a loose ball right after he had converted a layup from a steal. The faces in the UCLA bench and of the coaching staff tells the story. If you want to relieve that moment again check out the highlights here on leading by example. That moment to me is the hallmark of what it takes to become a ball player for Coach Howland. DC led by example and it rubbed off on rest of their team-mates. The leadership experience that he accumulated in those last two years it's something you can't put a price tag on. I do believe it was invaluable to him in his development in not just a basketball player but as a leader of a team on and off the court.

3. Complete the following sentence: Darren Collison is quicker than...

Hmm. If I  may let me bring up the example Jerry Rice. Remember at his time Rice wasn't the fastest received in the NFL. There were other athletes in the league faster than Flash 80. However, Rice had something very special, called "game speed." When Rice caught the ball in the right spot, there was no one faster than him. I have seen every game DC has played during his UCLA career. He doesn't really remind me of anyone specific when it comes to his speed. However, I think when it comes to game speed he is as fast as anyone in this year's college draft (if not the fastest athlete in the draft). When it comes to quickness on both ends of the court, I will take his game over anyone else.

4. Collison doesn't have the prettiest form on his jump shot, but his shooting percentages at UCLA have been quite high.  Is this a byproduct of being able to get easy shots around the hoop with his quickness, or are people making too big of a deal about his shooting motion?

DC shot right around 50% from 3 for his career. The guy can flat out shoot the ball and we think he's better on the perimeter right now than he is going to basket. Finishing around the rim will be his biggest adjustment IMO.

So those some of our thoughts wrt to questions about DC. If you have even more thoughts, pile them on in the comment threads. Again consider this an opportunity for you to give a recommenation to one of the greatest Bruins of all time.