Another NBA draft night. Hopefully it will be another night to celebrate the ever expanding NBA family of Ben Ball warriors here on Bruins Nation.

We know the NBA markets itself as the place "where amazing happens" but there is not much doubt about UCLA being the college basketball program where amazing begins. In case anyone needs a reminder per the datapoints our friends at Rush The Court looked up last July, UCLA has been the number 1 college basketball program in America since 1949 among schools with the most NBA draft picks.

We had an incredible draft night last year with KL, RW and LRMAM. Expectations are a little mellower this year. However, that shouldn't dampen the enthusiams to celebrate the contibutions of three incredibles seniors one more time here on Bruins Nation: 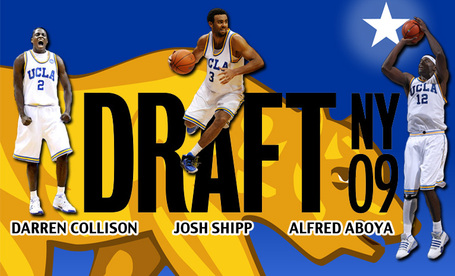 Graphic Credit: A Huge Thank You To Erkki Corpuz

The spotlight is obviously on DC, our floor general for last three years. If it all goes well it could be great night for him culminating after four incredible years in Westwood. We know JS and PAA are longest of long shots. However, as mentioned above it shouldn't by any means diminish the gratitude we all feel for the impact they have had on UCLA basketball helping Coach Howland rebuild our program.

The draft festivities get started tonight at 4 pm PST. WWL is all over it and you can follow ESPN's coverage online over here.

So best of luck to DC, JS and PAA tonight. They will have the whole Bruin Nation pulling for them. On that note fire away in our 2009 NBA Draft Party thread.

UPDATE (N): Congrats to DC!!! He goes to New Orleans Hornets at number 21 spot. Earlier in the night Jrue Holiday despite the relentelss hype of being a lotter pick dropped down to number 17, going to Philly. Some early tidbits from UCLA athletics tweeter feed:

UCLA now has six first-round draft picks in the last four years. No one in the nation has more (pending the end of tonight's first round).

What a great day for UCLA Bruin players again! 2 more 1st round picks. Congras to Darren and Jrue. The whole team watched it in my office.

And we are all watched right here on BN. Now here is to wishing JS and PAA luck rest of the way and congrats one against to DC! GO BRUINS.