Well this is kind of hilarious.

First a little refresher on what has gone on over at U$C's* sidelines (forget the stuff about allegations around agents) over the years:

Sideline passes for USC home football games might rank second only to Lakers' courtside seats as the ultimate status symbol on the Los Angeles sports scene, even if Kobe Bryant is not a Trojan. [...]

"I wish everybody could have the experience," Carroll said. "You can't see anything, it's not a great place to watch the game. It's just kind of cool and fun to be there." [...]

Rapper Snoop Dogg, for example, famously caught a ball tossed by running back LenDale White after a touchdown in 2005.

"Where else can you do that besides L.A.?" White said afterward.

However, the majority of sideline pass recipients are under the radar.

"To a certain extent, you want to create buzz," Lopes said. "This is L.A, we're in a big market and our games are on national TV.

"But there are a lot of people you don't know that are obscure . . . donors that have done something for the department. You want to take care of those people."

Uh yeah. I am sure the NCAA is looking into who was being taken care off over at U$C* all these years. But this post is not about that NCAA investigating. This post is about sideline passes.

Apparently under the current Pac-10 rules coaches cannot have their kids on the sidelines. So Neuheisel's three sons - Jerry (17), Jack (14) and Joe (12) - who are obviously huge UCLA football fans cannot be at the sidelines during the games at the Rose Bowl. CRN has been trying very hard to change this rule. He recently tried to get the rule changed by lobbying all the other Pac-10 coaches. Here is how it went:

I am assuming from that speech it was Petey who raised the objection?

Does anyone know more about this?

So Petey is objecting to little Joe Neuheisel hanging around UCLA football sidelines so he can be near his Dad during UCLA games: 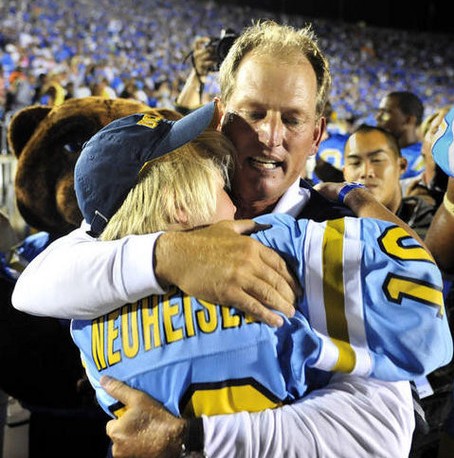 While he has no problem allowing this kind of character on the sidelines of his program?

Does anyone know anything more about this?

Does Petey really have objections to coach's kids hanging around his team's sidelines?