We will start our Tuesday roundup with some tough news from the football program. It appears that Osaar Rasshan's football career might be over:

Osaar Rasshan, who started three games for UCLA at quarterback, will undergo labrum surgery on his right shoulder today and take a medical retirement, ending his playing career, according to sources.

He is expected to remain with the program in a yet-to-be-determined capacity, but the retirement means the athletic scholarship is open.

If all of UCLA's incoming recruits qualify academically, the Bruins would be still two over the maximum 85 allowed by the NCAA.

Good luck to Osaar with his surgery and rehab. It didn't work out for him as a QB at UCLA. Hopefully he will be able to use his education from UCLA to find success in whatever he pursues after football. If he stays committed to program, I am sure the coaches will find a way to keep him involved. Good luck OR.

Darren Collison (guard, UCLA): "Darren was everything you’d expect from a kid who played point guard for Ben Allen for four years. A tremendous defender…. He knows how to play. Being the son of two track stars, it’s not surprising he runs like a track star. He always seems to be leading a break. Intangibly, he has all the things you look for in a point guard. He’s small and very lean, but very impressive – athletically and defensively."

Yeah, he really wrote Ben "Allen." lol Let's not hold it against him though. Josh and others are quickly finding out what we as Bruin fans were fortunate to watch for four years at UCLA. DC is special.

Switching gears over to soccer after a Bruin (and team captain) Carlos Bocanegra saved the day for Team USA this past weekend, the team officially named four Bruins (including Carlos) to its roster for FIFA Conderations Cup:

UCLA soccer alumni Carlos Bocanegra, Jonathan Bornstein, Marvell Wynne and Benny Feilhaber have been named to the U.S. 2009 FIFA Confederations Cup roster. The U.S. will play Italy, Brazil and Egypt in the tournament, which will be held in South Africa from June 14-28.

If you are a soccer fan, these games are must see TV.

We will end the Tuesday with an update on Pete Carroll's bizzarre stand against keeping coach's kids away from team sidelines. The story has been picked up by number of outlets including ESPN. Predictably though the Trojan LA Times is offering up excuses as if it were Pete Carroll's surrogate:

Sidelines can be unfriendly places for kids. Heavy equipment is all over the place, and that's not including the 300-pound linemen. Grown men run out of bounds at a full sprint. Carroll once saw one of his own receivers sprain an ankle while avoiding a small child on the sideline of USC's practice field.

Uh huh. Yet somehow all the Pac-10 coaches except Carroll had no problem with coach's kids standing on the sidelines. Keith Arnold over at CollegeFootballTalk notes the obvious hypocrisy (which was not suprsingly omitted from the LAT's report linked above):

Funnily enough, an article in the Los Angeles Times less than a year ago, had Carroll speaking a different tune about sideline passes. "I wish everybody could have the experience," Carroll said then. "You can’t see anything, it’s not a great place to watch the game. It’s just kind of cool and fun to be there."

Of course, Carroll was speaking about the bandwagon celebrity contingency that help raise the Q rating of his program, not the family members of his coaching staff.

So what's the real explanation for Pete Carroll keeping little Joe away from UCLA sidelines so that he can hang out with his Dad? 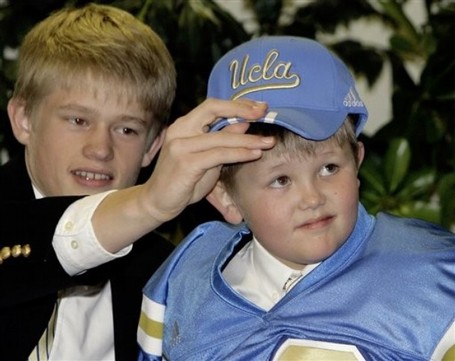 Does Carroll hate Neuheisel that much that he is willing to extend that over to his little boy?  Again remember the key detail: Pete Carroll is apparently (per reports we have heard) the only Pac-10 coach who is against this. All other 8 Pac-10 coaches support the idea of being able to have their kids on the sidelines on gameday.

Is he going to maintain this stance all the way through Father's Day?