Bumped. As mentioned below, captainqtp has also gone over the positions of SS and CB to keep the football discussions going here on BN. Keep them coming captain. GO BRUINS. - N

In 2008, we had one of the best, if not the best defensive tackle tandem in the PAC-10, with Brian Price and Brigham Harwell. Brian Price ended up winning 1st team all PAC-10 honors and Harwell 2nd team. While we will be welcoming back Brian Price this year, we lose Harwell to graduation.

Jerzy Siewierski is currently on the top of the depth chart for the other defensive tackle spot: 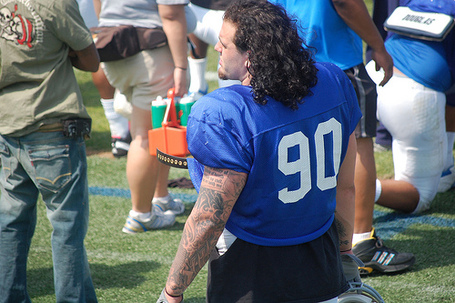 While it is hard to say how he'll perform on the field, we do know he is a gifted athlete. Chuck Bullough has called him the most athletic of UCLA's linemen. He is 6'2" and 290+ pounds, but he can dunk a basketball. That sounds pretty impressive to me.

It is hard for me to say he'll be an upgrade though... He was only one year behind Harwell, and while he got some game time the last three seasons, Harwell was still the clear starter. Whether upgrade or downgrade though, I do think Jerzy is a very solid replacement, and I'm excited to watch him play on Saturdays. What am I woried about is the guys playing behind Price and Siewierski this year. We are pretty thin at the DT spot.

So, what do you guys think? Is Jerzy Siewierski an upgrade, downgrade or about the same as last year's Brigham Harwell? As always, comments are welcome.

Is Jerzy Siewierski an upgrade, downgrade, or about the same as last year's Brigham Harwell?