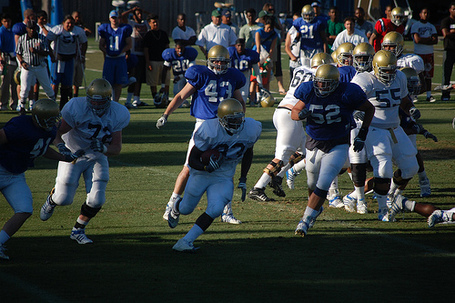 Ok everyone, I hope you all are having a great weekend. It is time to start the polling for the offensive positions. We have already covered all of the positions with significant changes at defense. Here is a quick summary of the polls as they stand at this point in time (I inserted links if you haven't voted yet):

I wanted to make a few quick observations... 1) If our polling means anything (hopefully it does!), then we are better at 10 out of 11 of our defensive positions from last year. This is great news. We had a solid defense last year, and we can expect it to be even better in 2009. 2) Even though we marked Siewierski as our only downgrade, it still looks like people are excited to see him play. As a starter, I tend to think he'll be fine. 3) I would have guessed that Aaron Hester would be our most unanimous upgrade, but it looks like Datone Jones edged him out.

The offensive choices are looking a lot more convoluted than the defensive choices. The offensive line for example, had a different lineup every single game. At running back, we rotated through several guys, our third string QB started the whole season, and our starting tight end only made it through part of game one. The only position that remains the same as 2008 is WR. As a result, you'll see me offer rotations in many cases rather than player x, player y. Also, I might ask if Bruins Nation thinks x player should start over player y.

Last year we used three primary backs (I'm a little foggy on some of this, so corrections are welcome if you guys notice anything wrong). At the top of the list was Kahlil Bell. Kahlil had a great 2007 before he got hurt, but never really seemed to get into his rhythm in 2008. I think was due to a couple different factors. As I'm sure everyone remembers the offensive line had a rough year in 2008. The other factor was that Kahlil didn't seem to be fully recovered from his 2007 injury. He looked a step slow all year long. It is too bad, as I think he had fantastic potential.

The next running back in the rotation was Derrick Coleman. He did a great job in his back up role and had the second most rushing hards and an amazing 5.4 yards per carry.

Finally, we had the veteran Chane Moline in there throwing blocks and breaking an occasional good run (he had a 40 yard sprint against Arizona). Moline was actually more of a fullback, but he did start 2 games at tailback, so I thought I'd throw him on the list.

In 2009, our post-spring depth chart looks like 1) Christian Ramirez, 2) Derrick Coleman, 3) Johnathan Franklin. We also have Milton Knox hanging in there on the periphery. He still stands a good chance of moving up the depth chart, and I noticed there were many Bruins Nation readers who were very high on him during the spring.

The coaches really like Christian Ramirez as the probable starter in 2009. Apparently, he is big, fast, and blocks well. We saw him a little in 2007. I must confess that he didn't impress me all that much in 2007. His pad level seemed high, and he didn't look very elusive. Nevertheless, we need a solid blocker and someone who can pound the defense and help keep the UCLA offense on the field for as long as possible.

Derrick Coleman gains another year of experience and should contribute even more in 2009. Coleman also blocks well, in addition to being another guy we'll be able to send north-south against opposing defenses.

Johnathan Franklin is our speediest back and possibly our quickest Bruin. UCLA columnist Brian Dohn said in the spring that Franklin was the fastest guy on the field, although that might change when Randall Carroll joins the team this summer. I believe the buzz on Franklin was that he still needs to refine his blocking somewhat, but that he is still a bit better than some guys lower on the depth chart.

Milton Knox is probably our most elusive back, and he played well at the final spring game earlier this year. Some people are commenting on how he looks a little like MJD, but I don't think he quite has the wheels or all around ability that MJD had. Let's hope he does!

I've given a summary of the running back situation this year and last, so let's get everyone's opinion.

I also have a follow up question here. Who do you think should start at running back in 2009?