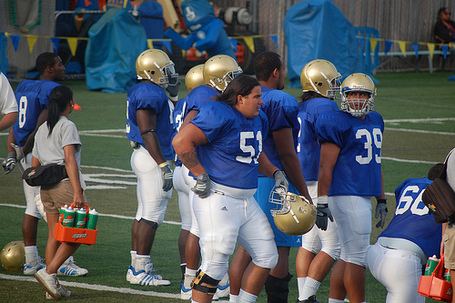 In 2009, I'm pretty sure Kai Maiava will lock down and dominate the center position. I doubt there will be any controversy here on whether he is an upgrade or not. Kai was a freshman All-American starter at Colorado in his first season. From what I've been hearing, he might be our offensive line's biggest stud. Last year, he transfered to UCLA and was ineligbile due to transfer.

He will be replacing Jake Dean (5 game starter) and Micah Reed (7 game starter, starter vs USC). While I can't recall their specific performances in 2008, I do think Center was a weaker position for us in 2008. While we bask in the 98% chance of an upgrade at center (I'm guessing obviously) let me know what you guys have heard or seen personally about Kai Maiava. I'm sure we'd all love to hear it!

Is Kai Maiava an upgrade, downgrade, or about the same as last year's combination of Jake Dean and Micah Reed?

Is Kai Maiava an upgrade, downgrade, or about the same as last year's combination of Jake Dean and Micah Reed?