Coach Howland Is A "Witness"

Share All sharing options for: Coach Howland Is A "Witness"

Well this is a fun  and interesting story.

Apparently King James after getting embarrassed in the Eastern Conference Finals was embarrassed again when reportedly Xavier's Jordan Crawford posterized him at his own summer basketball tournament. According to Gary Parrish of CBS Sportsline.com it was so humiliating for the Nike Boy that the shoe company's reps. (reportedly) tried to cover up the video of this dunk:

Because you're not going to see it.

Turns out, there were at least two cameras rolling Monday night when Crawford dunked on James during a pick-up game here at the LeBron James Skills Academy. It was a two-handed jam, the kind that would've circulated quickly on YouTube. But Nike officials eliminated that possibility shortly after the dunk happened by allegedly confiscating tapes from various cameramen.

Freelance photographer Ryan Miller was one of the cameramen shooting the game.

"He just said, 'We have to take your tape,'" Miller said. "They took it from other guys, too."

Worth noting is that there is no policy against filming at the LeBron James Skills Academy, and Miller said he had been filming all day without incident. Nobody ever told him to stop. Nobody ever said there was a problem ... until after Crawford dunked on James.

You can read the full post here. The story has burned up the nets including over at Deadspin where Tommy Craggs wrote the King got Tom Chambered before the video "was commandeered by a Nike goon".

But here is when the story gets really fun with a Bruin angle. Come along after the jump ...

So Ryan Miller who shot the video blogged about this little fiasco on Syracuse.com:

Xavier's Jordan Crawford blows by Danny Green on the right wing to get into the lane, LeBron helps on defense, leaving his feet to contest the shot and Crawford throws it down with two hands.

There was the initial collective gasp that comes before raucous applause on a big-time play...but then no raucous applause, just small buzzes of murmuring between adjacent spectators.

Everyone in the building was a witness, but they know not to cheer a play the victim's name is eponymous with the camp they are attending. You just don't do that to arguably the greatest athlete in the world, in his hometown, at his own event.

No ovation, just a gasp and near silence.

Guess who Ryan shared the story with last night over dinner (emphasis added):

I ended up following Jeff Goodman (FoxSports.com), Gary Parrish (CBSSports.com) and Pete Thamel (NYTimes.com) from Akron to Cleveland, where the King City Classic is held, to grab a late dinner.

There were dozens of D-I coaches roaming the hotel and somehow I ended up at a dinner table with UCLA head coach Ben Howland (not just the two of us, that'd be a little awkward).

When it came time to pay, Howland insisted I don't, saying I provided them with a great story for the night instead. I tried to explain to him I have a six month grace period on my loans, and now is the time where I have a few bucks in my wallet. So I'm pretty sure Ben Howland bought me dinner.

Guess Nike will not be calling on Coach Howland for their latest campaign: 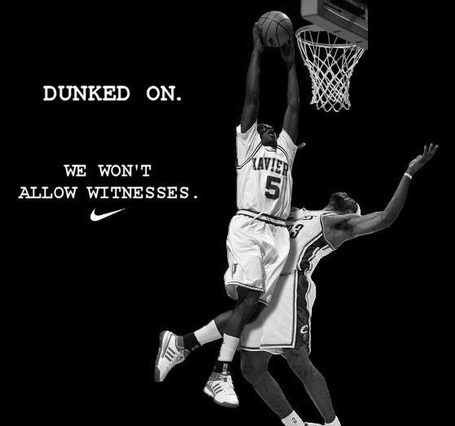 That's from Gary Perrish who continues to be all over the case over a player who increasingly appears to be the perfect poster child for all the primadonnas infesting the NBA.