Yesterday I was fortunately able to sneak away from the office for about an hour to swing over and catch some of our first practice. Just had a couple of quick impressions that I thought I would share:

1 - Crissman was taking a few snaps with the 1st team and almost all of the snaps with the 2nd team and looked pretty solid. It was also nice to see that he has put on some weight. Last year at this time he looked incredibly scrawny to me, now he actually looks like a college football player. Prince was taking the rest of the snaps with the 1st/2nd team and his arm looked good, though he made a couple of bad throws (one of which ATV was able to pick off). Craft and Brehaut were only watching from the sidelines while I was there.

2 - Hasiak and Su'a Filo are as big as advertised and looked perfectly comfortable out there on day one. Hasiak in particular was blocking Brian Price on his own for one set and handled him (and while admittedly they weren't in pads and hence not going full boar, the fact that one of our true freshman was even able to handle one of the best DT in the country on day one is encouraging.) There were a number of plays were Hasiak and Su'a Filo were manning the left side with Kai Maiava in the middle and all three looked strong, were getting some push and worked well together as a unit. I would not be at all surprised if that was 3/5 of our starting line against SDSU.

3 - Morrell Pressly is going to be near impossible to cover. The match-up problems that he is going to create have already been discussed around here this summer, but its worth noting again. When he was lining up as a TE he was flat out running by the LBs and when split out the DBs don't have the size to cover him. He made a couple of great catches where Prince or Crissman just threw the ball up and between his height and his leaping ability the defenders never had a chance at the ball.

4 - Thigpen is really fast. He was practising as a gunner on punt coverage and was fying down the field. I didn't get to see Carroll sprinting on any plays, but would love to see a foot race between these two guys. If they get much playing time this year they should be really exciting to watch.

5 - Lastly, a bunch of us in the stands were having a good laugh at seeing little Papadakis, the ultimate $C homer's younger brother, out there in Bruin blue. He was getting some work on the punt coverage team. Should make for some interesting family dinners for the Papadakis clan this fall. 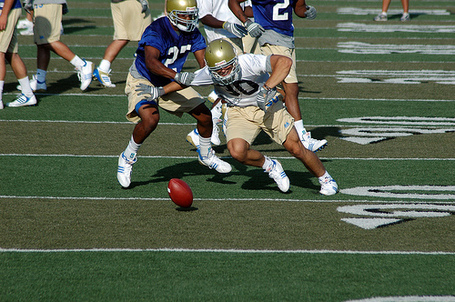 I am hoping to get back out to the field this afternoon and have my camera with me this time, will certainly post any pics that I take. I am so stoked that football has finally arrived! Go Bruins!