Bruins are having a physical practice out in Spaulding: 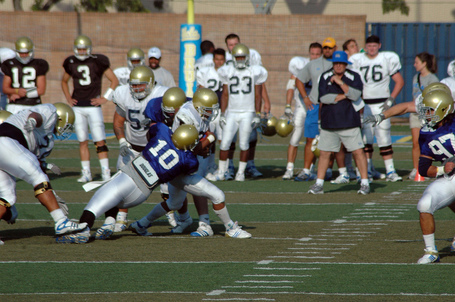 And not surprisingly, after first week of practice UCLA football team has some bumps and bruises to report. Per the LAT DT Jess Ward sat out practice Saturday because of a sprained medial collateral ligament in his right knee:

Ward will have an MRI exam Monday to determine the extent of the injury, though Coach Rick Neuheisel said he was led to believe it wasn't serious.

The Bruins have Brian Price, one of the nation's best, and Jerzy Siewierski, one of the team's best all-around athletes, as starting tackles. But Ward, a 6-foot-4, 296-pound senior, has played in 24 games, starting six in his career.

"The doctors don't think it's serious, but he'll have an MRI on Monday, so we'll find out," Neuheisel said. As for need to have Ward available, Neuheisel said, "Depth is an issue."

Ward has struggled with injuries in the past. He injured his left knee in 2007 and required off-season surgery. He said he injured the right knee, "doing a pass rush. I dragged my foot and I felt a little pull" on Friday.

Senior offensive guard Nick Ekbatani injured his left knee during Saturday's second session but was able to walk off the field on his own power. He was examined by trainers before he went into the locker room.

"The initial prognosis was an MCL," Neuheisel said. "They'll get him looked at, but he'll be down for a bit."

Ekbatani is one of the more experienced members of the offensive front. His absence could open the door for one of several freshmen trying to earn a spot on the offensive line.

"You hate to have injuries in your offensive line but unfortunately it's part of the deal," Neuheisel said. "Somebody is going to have to step up, which is always the case."

Other injury notes include:

The Bruins were also without linebacker Steve Sloan, who is expected to be out a few days because of a concussion.

"He has to go through the whole concussion protocol," Neuheisel said.

As CRN indicated above these kinds of bump and bruises are part of football camp. Hopefully the guys who are behind them will make most of their opportunity by stepping up. Meanwhile, here is to the guys coming back after getting some time to rest and heal up this weekend.

UPDATE: (N): It looks like another lineman - Reggie Stokes - was injured during Sunday practices. Stokes was helped off the field after (according to the LAT) he injued his right knee: 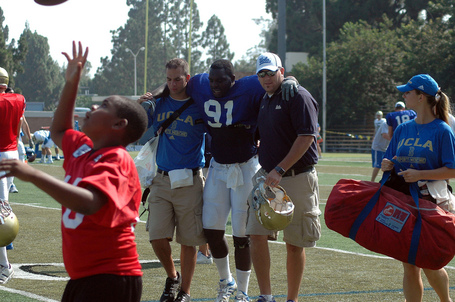 Erik Boal reported that there was "swelling in hsi right knee." We will probably get more updates either today or tomorrow. GO BRUINS.

UPDATE II (N): Looks like we have some pretty tough news courtesy of Jill Painter in the Daily News:

As was feared, Reggie Stokes' MRI showed torn cartilage in his right knee so he's out indefinitely. No course of treatment has been decided yet. Jess Ward's MR showed a sprain of the MCL, and he's expected to miss 2-3 weeks. Offensive lineman Nick Ekbatani's MRI of his left knee showed a sprained MCL, as expected, and he'll be out an estimated 4-6 weeks.

That is tough news re. Stokes. Hope the kid hangs in there as the coaches were expecting big things out of him. Hopefully Ward can be ready in few weeks. I am guessing we might see some position shifts from OL to DL for coaches to manage depth issues at DL. We will find out soon. This is why I have been tempering my expectations wrt to this season. The way the previous coaching regime underrecruited talent at both lines is impacting the program right now and it will take a while to build up the kind of depth that will enable us to contend for the real prize. We will see what happens. I am hoping the other guys will step up. GO BRUINS.