In my post on injuries I wrote about players needing to step up whenever someone gets nicked up in practice. The guy so far that is taking the most advantage of injuries is freshman WR Ricky Marvray. Ricky has been getting more reps due to another freshman - Randall Carroll - sitting out from a groin injury. Apparently he is making a fast impression on Neuheisel and rest of the staff. From Erik Boal in the Daily News:

While coach Rick Neuheisel is waiting for freshman Randall Carroll - the state 100- and 200-meter champion at Cathedral of Los Angeles - to return from a groin injury, Marvray is taking full advantage of the Bruins' desire to stretch the field on offense.

"I always want to be the deep threat. Who doesn't want to score?" said Marvray, who averaged 17.7 yards per catch during his senior season at Division I state champion Centennial of Corona. "I'm just looking for the ball, period. I'm trying to get open any way I can. ... I've been known to be able to get it done before and I'm just going out there and giving it every ounce in my body to try and make things happen."

It's an attitude that caught the eye of Neuheisel and offensive coordinator Norm Chow, who steadily have been rotating Marvray with the first unit in live scrimmage situations. That gives Prince several deep threats along with senior Terrence Austin, sophomore Taylor Embree and fifth-year senior Gavin Ketchum.

"Ricky is the type of guy that doesn't let you put him on the bench," Neuheisel said Sunday. "He's always going 100 mph whether he's right or wrong and you have to respect guys who want to play that badly"

Per Erik's notes from the DN blog Marvray had some of the most spectacular offensive plays from yesterday's practice:

Offensive play of the day: Although redshirt freshman tailback Johnathan Franklin had the longest gain in any live drill with his 40-yard run, it was freshman receiver Ricky Marvray that came through with several impressive catches, the most signifcant a diving reception in the end zone in between two converging defenders on an underthrown 20-yard pass by Kevin Prince during 7-on-7 red zone drills. Marvray also added a leaping 25-yard reception over the middle and in coverage on a pass by Richard Brehaut and hauled in a 15-yard pass by Kevin Craft along the sideline.

Perhaps Randall is going to feeling healthy very soon. lol As I said in my last post, this kind of performance from the freshman talent will exert pressure on everyone throughout the depth chart to step up their performances. It's creating a sense of urgency that I haven't sensed around the team for number of years. More on that after the jump.

Chris Foster from the LA Times reports how RBs Milton Knox and Johnathan Franklin are doing their best to break into the 3 man RB rotation. Apparently the competition is fierce that CRN is now open to a 4 man rotation at the TB:

UCLA running back Milton Knox spent the last few months running up and down the large hill near his family's house. Occasionally, he hit the dunes in Manhattan Beach, plowing his way through the heavy sand.

"I'm a man on a mission this year," Knox said. "I know the playbook. The game has slowed down for me. I have to show them what I can do."

There is some urgency for Knox and fellow redshirt freshman Johnathan Franklin. Junior Christian Ramirez and sophomore Derrick Coleman are the top two tailbacks. The scrap is for the third spot and a chance at some playing time.

"If you're divvying up game reps, it's hard to use more than three," UCLA Coach Rick Neuheisel said. "But that doesn't mean you can't use four in a game."

However, CRN also talked about how these guys will have to handle pass blocking if they want to get in the game:

"Both still have to handle the pass protection, that's the key," Neuheisel said. "You can't collapse just because somebody's coming at you 100 mph. We haven't broken that egg yet."

Which means they have to get out of the mindset of looking for home run plays every rep and focus on helping the whole team pick up chunks (remember the goal of getting at least 4 yards per carry) of yardage one down at a time:

"Milt has come in and had a really good four days," running backs coach Wayne Moses said. "He's hitting the hole now, not looking for the home run all the time. He's going in and snatching four yards and that's a good play for us."

These guys will have to continue to pound away every play at practice and not get down based on how the rotation looks on coach's depth chart at the end of every day: 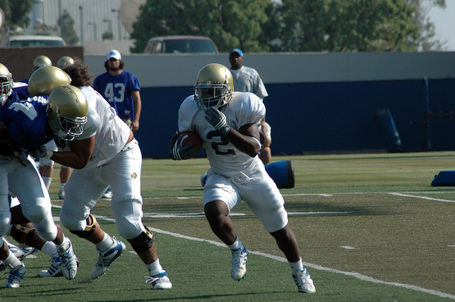 Knox with a sense of urgency. Photo Credit: E. Corpuz

This is one of those positions where there will be players getting nicked up and hurt. The key for them will be to have mindet that Mavray is showing and ready to step up, as soon as they are getting extra reps.

One of the players who is doing whatever the coaches ask of him in converted FB Chane Moline. From the LAT:

Moline is not really a fullback, but he plays one on TV on Saturdays. He made the move from tailback in the fourth game last season, after Trevor Theriot suffered a season-ending knee injury. Moline has not let go of the starting position.

"Chane is just a good football player," Coach Rick Neuheisel said. "I think whenever you ask a skilled athlete, a guy who has lots of yards and catches the ball well, and ask him to go be the fullback, that's a change in roles."

At least it is a role. This is the first time that Moline has had a position to call his own. It's more an off-the-rack fit, but it has worked well.

Moline has had to work on his nasty side. He beefed up to 247 pounds during the off-season and is constantly working on his blocking.

"I had to get bigger and stronger," Moline said. "I can catch a pass and I was a tailback here, so I have pretty good ball skills. But blocking has become my main focus."

And yeah Moline and rest of the FBs are getting an extra push this year by yet another precocious freshman - Jayson Allmond - who well - just read his quote in the paper (emphasis added):

Jayson Allmond, a 6-foot, 260-pound freshman, is already getting looks with the first and second teams. Whether Allmond will get playing time this season depends on his ability to absorb the offense.

But, "He's a hitter rather than a hittee," Neuheisel said. "We're looking for hammers rather than nails on that collision."

Or as Allmond put it: "I knock and block. I'm not used to sitting back and watching everything. But I'm a freshman and I have to wait my turn."

Again these kids - Allmond, Marvray et al - are true freshmen. Does anyone really remember freshmen speaking with so much confidence during their first year of practices at Spaulding? I certainly can't and to me it is signaling a subtle cultural shift in the program where these new guys are truly taking on the personality of their head coach right away they stepped into the practice field. Of course as Allmond noted he will probably have to end up waiting his turn, however, he is not letting that reality keeping him down and by all accounts giving everything he has at the practice field.

Lastly, as we are on the topic of freshmen turning up the heat on competition, it looks like Brehaut and Craft now have more competition for the backup spot behind Prince. Erik Boal from the Daily News posted the following on Ted Landers, a 6-foot-5, 186-pound walk-on from Serra of Gardena, who got in his first reps at Spaulding and apparently made the most of it right away against the third team defense:

Landers, who hadn't practiced in previous days in order for all of his paperwork to be certified with the NCAA Clearinghouse, took eight snaps during 11-on-11 competition.

Landers completed 3 of 4 passes during 11-on-11 competition, including a 15-yarder on his first attempt to freshman Ricky Marvray and a 20-yard connection with Antwon Moutra on his last throw.

Although Craft has the edge in experience, none of the quarterbacks have distinguished themselves in the quest to be Prince's understudy. Although he was competing against the third-string defense, Landers threw the ball with confidence and hit his receivers in stride.

Not bad at all. Again we have to keep this in perspective and remember Landers was going up against the third team. However, at the same time I bet that kind of start creates that sense of urgency on Prince, Crissman and Brehaut (and even he is just a true freshman!), forcing them to focus and work even harder in their next practice.

No wonder this guy seems to be having a good time out at Spaulding: 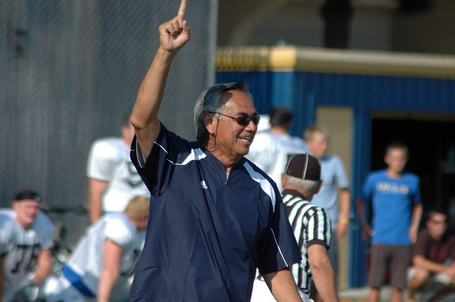 So if you are out in Southern California and haven't done it yet, get out there and take in more practices. Because from what I am reading it hasn't been this fun in a while in Westwood.