So to date we have taken a look through the options available at quarterbacks, running backs, and the offensive line of this year's team. Provided that our offensive line improves from last year's dreadful season and Kevin Prince and co. can provide steady play at the quarterback position, we might be able to see some fireworks courtesy of our wide receivers and tight ends this coming season. These are two positions Bruins will be loaded IMHO heading into this football season.

Let's go through the wide receiver position first. The two guys slated to start are Taylor Embree and Terrence Austin. From Sam Saig at All Pac-10 blog:

The top three receivers from last year’s squad are back, including sure-handed sophomore Taylor Embree.

The 6-3 194 pound Embree burst onto the scene last season, setting school records for receiving yards (531) and receptions (40) among freshmen wideouts. His 531 receiving yards led all Bruins in 2008 and his 40 catches were second on the team. Embree’s fantastic freshman season garnered national attention as he was named second team Freshman All-American by The Sporting News. He played in all 12 games, and started eight.

Embree is a possession-receiver in the best sense of the term. The Overland Park (KS) native is an exceptionally gifted route-runner and possesses rare instincts that allow him to separate from defenders. Those instincts could make the cerebral sophomore Kevin Prince’s emergency option whenever a play breaks down.

Embree does not shy away from contact, and routinely ran dangerous "across-the-middle" routes last season. He uses his big frame very well, and has tremendous hands that seem to catch everything, especially for first downs. Embree enters the season as one of the premier offensive threats for the Bruins.

Joining Embree as a starter will be senior Terrence Austin. Austin led the team in receptions as a junior with 53. He finished second on the team with 461 receiving yards and one touchdown. The 5-11 173 pound flanker is a multi-talented athlete that can hurt the opponent in a variety of ways. He set a school record last season with 1,878 all-purpose yards, which broke Maurice Jones-Drew’s mark of 1,863. Austin also became the first Bruin ever to eclipse 1,000 yards on kickoff returns (1,109).

Austin is very effective on reverses and trick plays, giving the ultra-creative Norm Chow a speedy playmaker to utilize in 2009. Last season, Austin had 13 carries for 90 yards (6.9 YPC). Teammates and coaches alike have praised the Long Beach Poly (CA) product for his leadership qualities, and he was voted as one of the team captains at the end of spring. Austin will be a key contributor for the Bruins in 2009.

Sam mentioned how Taylor doesn't shy away from contact and has no fear running across the middle. I think we can say the same about Austin given the courage he displayed last year (just think back to the Oregon game in Eugene). The question that folks will have is whether Embree or Austin will be able to give us that breakaway option at WR. Sooner or later at least Austin is going to have to house it this year because hopefully he is going to get some strong competition this year. More on that after the jump.

So who will Austin and Embree get that competition from? Well we already have Nelson Rosario on the fold who at least in terms of size (6-5, 214) and athleticism provides us the kind of target we probably haven't had at WR position since the days of Danny Farmer and J.J. Stokes. Case in point: 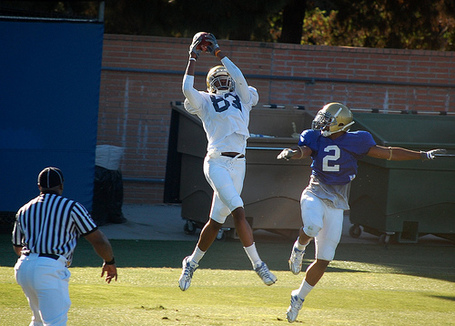 He had some money grabs last year (v. Tennessee and Stanford). He also has no problem running those difficult routes. He caught 11 passes for 169 yards in his freshman year and I can't wait to find out the kind of season he will come up with in his second year.

Meanwhile, speaking of kids giving Austin a push in the department of speed, we have to talk about Carroll:

[I]t’s Carroll, and his where-did-he-go speed, who could give the passing game a quick-strike element that would have to be respected.

Carroll, who played at Los Angeles Cathedral High, will have to show he’s ready. At 5 feet 10 and 184 pounds, he could use a little more meat. His savvy level needs to grow.

All that will come. What Carroll already possesses is afterburner speed, as he was a two-time California state champion in the 100 and 200 meters.

Senior linebacker Reggie Carter has seen that speed on display during seven-on-seven workouts this month.

"When the ball is in the air, he goes and gets it," Carter said. "There have been some passes where I thought, ‘No way anyone gets that,’ and he takes off and gets there."

That element could make an already solid group lethal.

That should given folks incentive to pack the Spaulding Field every day starting Monday. I guess the main question right now is whether our much maligned OL will give Prince and co. enough time to find and strike targets like Randall.

Randall will not be on the only option at WRs for Kevin. We will have seniors like Gavin Ketchum as hopefully reliable options. Gavin at 6-5 210 pounds also provides a huge target for our QBs and he has shown decent ability to block downfield. Both Gavin and Rosario (along with Embree) should be able to provide options as attractives targets when our offense gets into the red zone. In addition to these guys we will also have young talents such as Antown Moutra, Jerry Johnson and freshman Ricky Marvray available in our depth chart. I have heard lot of great feedback on both Moutra and Johnson in terms of their size and speed. I am going to assume if those guys prove themselves at Spaulding Chow and Neuheisel, will not hesitate from calling their numbers on game day.

Speaking of big targets, we haven't even gotten to discuss our TEs yet. The TE position will be rich and deep in proven talent provided Moya and Paulsen can stay healthy. From the LA Times:

The absences of Moya (ankle surgery) and Paulsen (broken foot) gave UCLA coaches reason to be concerned in the spring -- so much so that Nate Chandler was shifted back to tight end from offensive tackle. Now offensive coordinator Norm Chow calls it the deepest p

osition on the offense and the place where he has the least worries … for now.

Injuries and other issues created a stockpile at tight end, where the Bruins have multiple personalities, starting with seniors Paulsen and Moya.

Paulsen, who was granted a medical hardship after breaking his foot in the 2008 season opener, is big and alpha-dog physical. Moya, who sat out the 2007 season due to personal reasons, was effective finding seams in the defense and led the team with three touchdown receptions. Both will fill those roles again.

But what makes tight end a Bruin stronghold are Cory Harkey and Morrell Presley.

Harkey, a sophomore, spent the 2008 season on the learning curve and the offseason in the weight room. He is 15 pounds heavier, up to 254 pounds, and is expected to be an effective point of attack tight end, as well as a gifted receiver. Harkey and Paulsen fit well into Coach Rick Neuheisel’s declaration that the Bruins "will be able to run the ball or die trying."

Harkey and Chandler will definitely give CRN and Chow physical options when they will attemp to ram the ball down opponents throats. Keep in mind, from what we have heard and read Presley at 6-4 222 can also provide a physical option even though chances are Chow might also line him at wide to create mismatch nightmares for opponents.

The bottom line right now is that we will able to take advantages of the talents available at these two positions if and only if we can get credible performance from our offensive line and quarterback this coming season. If our OL can generate an above average running game and give Prince and co. enough time to locate the targets, it could be a very fun season. We are not going to know the answers until we see what transpires at Spaulding starting Monday and then game time in less than 30 days. The anticipation is killing me.