The Bruins football team has an interesting history with the Volunteers of Tennessee.

A history I don't plan on writing too much about in this post. At least nothing I have to research -- I'll just toss out a few things I remember.

The teams have actually played quite a few times, more than a dozen, and I'm guessing that's more times than UCLA has played any of the SEC teams. The two schools have something in common, too. Both athletic departments are defined by the accomplishments of their legendary, Hall of Fame basketball coaches. You can tell them apart because John Wooden never (to my knowledge, anyway) dressed up as a cheerleader. 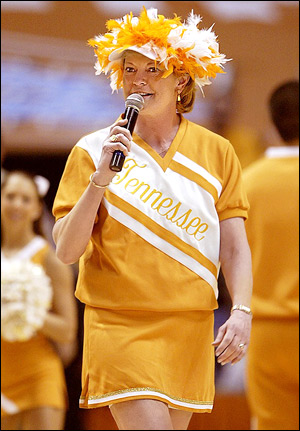 The first Tennessee game I remember was one in which the Bruins won 26-26.

I watched this game in a buddies Koreatown apartment.. We drank. A lot. Yet I remember the game. The Bruins fell behind 26-10. Terry Donahue replaced Matt Stevens with David Norrie in the fourth quarter. We scored two touchdowns, converted both two-point conversions and basically beat the Vol 26-26.

The next UCLA-Tennessee game I remember is the 97 game. Cade McNown and company lost to Tennessee who were led by some dude named Manning. Ended up a decent player in the pros, does a lot of commercials. UCLA fell to 0-2 that day in the Rose Bowl. The next week they went to Texas and won 66-3. The would win another 19 in a row before losing to Miami in December of '98.

Then there was last year. A great win that unfortunately did not lead to a great season.

What does all that mean? Nothing. I'm just vamping while I try and think of some guesses. Have them after the jump.

I used to be okay with them in a "respect the opponent" sort of way. But in 2000 I went to Alabama to watch the Bruins beat the Tide and the 'Bama fans were really cool to the Bruin fans who went down there. And for two years there were a lot of Alabama fans on the Bruins boards (it was a home and home -- we beat them twice btw) and they were pretty cool, too. And because Alabama fans hate Tenneesse, I feel sort of obliged to not like Tennessee, too. The fact that their coaches have a nasty, USC connection just adds fuel to the fire.

In light of the fact that I wrote about the 26-26 tie, the first question is:

Will the game end in a tie?

1) One key to the game is whether or not UCLA will be able to run the ball against Monte Kiffin's "vaunted" cover-two defense. First question: How many yards will UCLA gain on the ground against Tennessee? (Correct answers are anything within 10 yards.)

2) Another key is how much pressure the Bruins will put on the Tennessee quarterback. How many sacks will UCLA record? (Need the exact number on this one.)

3) Finally, UCLA must win the turnover battle if they are to win the game. How many turnovers will UCLA force in the Tennessee game?

(Thanks again to hiicaliber for totaling the scores. We're still working the system out and in the coming weeks I think we'll see hiicaliber writing the guesses, too. Thanks man, we owe you one.)