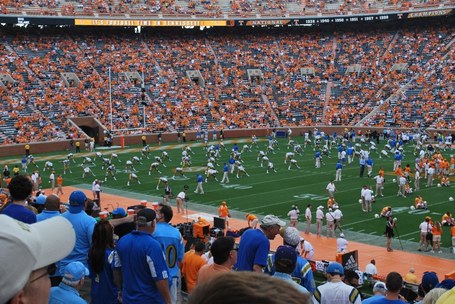 One thing I want to make clear.  Without a doubt the people and fans of Tennessee, from Nashville to Knoxville, are the most passionate, polite and kind fans I have ever met.  Whether on the street or in hotels or at bars or restaurants, wherever, when almost any local saw me or my family in Bruin regalia they were uniformly kind, gracious, hospitable yet unbelievably passionate about their team, especially so after their loss.

In fact, after they were going down to defeat and one Tennessee fan cussed UCLA, the crowd around him hushed him and a young mother holding her child next to my wife apologized for his behavior.  We were right smack dab in the middle of hundreds of Tennessee fans: 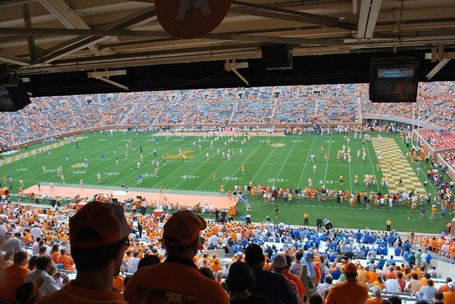 Tennessee fans were knowledgeable, passionate and tolerant of my equal screaming on behalf of our team during the most heated moments of the game.  We could learn a lot from these fans.  In fact, some of them mentioned how well they were treated by Bruin fans over the years in their trips to the Rose Bowl to play us.

Nashville was a blast.  The honky-tonk bars were fun, cheap and the musicians are fantastic playing everything from country to Bluegrass to Rock and roll hours on end.  Some of the performers were phenomenal including the BB King All Stars at his club on 2d Avenue.

If you want to hear all about the Knoxville experience and Neyland Stadium, read on.

The drive to Knoxville was beautiful and easy, about 2 1/2 hours.  The road was filled with Tennessee cars festooned with pom-poms, flags and decals.  The Tennessee radio announcers were on AM and FM the whole way.  They were surprisingly objective and respectful of UCLA though certainly expecting, like most, a 10 point UT win.  They made a big deal about the Lane Kiffin, Monte Kiffen, Norm Chow connection and speculated about who would win that chess match.

A stop at our hotel, the Hilton Knoxville was fruitful.  The team was leaving past the Starbucks walking straight downstairs the steps, past me sitting with my video camera and outside to the waiting Blue and White buses and their police motorcycle escorts.  I videoed the entire team, players and coaches as they walked silently by.  Coach Chow was completely focused.  Coach Neuheisel noticed me as he passed.  He said thanks when I wished him and the team good luck.

What my family and I noticed the most was the mood of the team: somber, determined, focused yet relaxed.  All business.  No joking around, but a quiet confidence, a good omen.

We walked the short mile to Neyland Stadium.  It sits on a bluff over the Cumberland River, a spectacular location.  On the way you pass through beautiful water displays and ponds, leftovers from a World's Fair held in Nashville about twenty years ago.  The campus seems to be all around you.  The sea of orange shirts takes you to an ocean of fans tailgating on one side and waiting for the Vol walk on the other.

The Vol walk, Rocky Top and the Pride of the Southland band are the triple whammy of Tennessee tradition.  Tens of thousands of Tennessee fans line up to wait for their team bus. The players came out dressed in black and followed a snake path through the screaming fans as they entered the stadium.  Shortly after, the entire band in full regalia, led by scores of drum majors and song girls marches down the hill, again flanked by thousands of fans.  At a corner they form two sides and the dancers perform to traditional tunes followed by the never-ending Rocky Top which is sung in unison by the tens of thousands of fans.

The whole time a radio broadcast of the Vol station is carried live by audio speakers with announcers making breathless points about the most insignificant Tennesee traditions and football you can imagine.  For example, this time two Tennessee legends were honored during the Vol walk and the game:  Johnny Majors and John Berry, the father of current player Eric Berry.  During the game fans would whisper, "There's Johnny," almost reverentially.  Others wished he was the coach because he would have just rammed the ball down our throats until the humidity got to us.

Oh, the humidity.  And the sun.  In the stadium the hot sun beat down on you, unless you were in the "shady" part or under the top awning.  Every time the sun was hidden behind the threatening dark and cloudy sky you wanted to thank the Lord.  Plus you were grateful the game didn't start until 4PM.  No way we could have survived a game that started at 1PM.  Impossible.

To get to your seats you followed a maze of erector set ramps.  Fans routinely volunteered [no pun intended] to help you find your seat.  The stadium seating is mainly bench, which was both practical and necessary since the average spot is fifteen inches wide.  You put your fanny smack dab down over your number and you keep it there, or you will find yourself much too friendly with your neighbor.

Entry into the bowl is awesome.  The stadium inside is vertical, very steep and the steps are very old and narrow with no railing.  The seats edge close to the football field, especially in the corners with only breathing room for the players on the sidelines.  At 60 minutes the countdown begins.

The teams shared the field for some time ignoring each other.  The fans screamed and chanted at every movement of the Tennessee players.  Our guys looked cool and calm as the coaches put them through their paces.

The huge band comes out on the field and plays among other things, the UCLA alma mater, then the National Anthem, which the fans all sang together without a lead singer.  Then it forms a huge moving T and marches closer and closer to the central tunnel where the Vols are waiting to enter the field.  When their team explodes out of the tunnel they run through a hollow T formed by the band as the fans go wild, all 102,000 of them with Rocky Top.

The whole scene is incredibly intimidating and exciting.  I cannot imagine how it must have felt to our team, especially the younger ones, but OMG, how young they all are!  For them to overcome in such fine fashion in such a difficult place to play is truly amazing.  Unless you were there you have no idea how loud the 100,000 plus Tennessee fans can be in this vertically, 100% elliptical, completely closed stadium.  To say you cannot hear yourself think is an understatement.  Then they pound their feet on the concrete and it feels like an earthquake, except it continues throughout the game, particularly at the key moments we need to shout out signals and hike the ball.

Coach got his glimpse of blue in that sea or orange.  The largest contingent was a group of about 2000? about the goal line to the 20 where the cheerleaders did their thing.  Others were scattered way high in a corner near the top.  To their credit, the Bruin faithful made their own share of noise and we interacted with the players who often implored us to support them by raising their arms to us.  Before the game and after the hotel was filled with scores of happy Bruin fans.

To say the least the game was thrilling.  The whole experience was awesome and unforgettable for both myself and my family.  We had never gone to a Bruin away game, outside of SUC, and this was particularly memorable and satisfying.

As the clock wound down to our victory, the Bruin players ran to our cheering section and we all celebrated together.  After his TV interview, Coach Neuheisel almost ran over to the fans and pumped his fists in victory.  Then he ran back to join his richly deserving team.

The Tennessee fans were amazingly classy.  Yes, they lamented the poor performance of their quarterback and rued their suddenly dismal prospects next week against Florida and then Georgia.  But they wished us a safe trip home and congratulated our win.  Without trying to patronize them I tried to soften their blow by telling them the truth.  They were the most passionate and polite fans I have ever met.  And I said they might might be surprised at just how much better their QB plays against Florida next week because our defense, frankly, is underrated nationally.

Coach Neu said we should go and be part of the glimpse of blue in the sea of orange because it is a special environment.  I was lucky enough to do it.  He was right in more ways than one.