Those of us who write for a living know a very simple truth: The pictures we choose to illustrate our words are far more powerful than our prose. They set the tone, convey the emotion, and shape the reader/viewer's reaction.

That is why I was so upset to see the images used to illustrate Chris Foster's LA Slimes piece on the suspension of our four players.

Simply stated, Foster presented something we've never seen in the reporting about those who get in trouble at our cross -town rival, he presented a "line up array" of pictures calculated to make our kids look "bad": 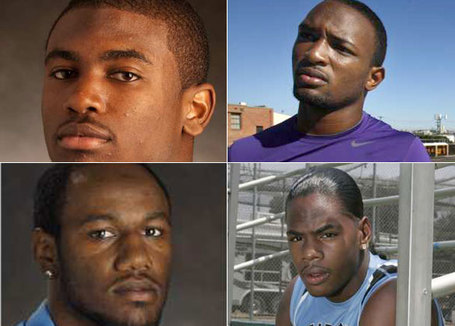 Think I'm nuts? Let's look at the picture he used of Morrell Presley:

And, now the official UCLA picture:

Difference in tone? You bet.

Honestly, deep in your heart, and taking race out of the picture, which looks more threatening and menacing?

The only pictures they could get?

Uh, no. The official UCLA website has pictures of all of these players:

You think they didn't know about these pictures? They did, They used Viney's official picture BUT they cropped it in a way that is less than flattering? Knox official picture has a faint smile; not the line up picture. And, for Carroll, they chose a picture, like Presley's.

As a matter of pure presentation, one could have cropped the official pictures to present a more true image of the player without taking up more room on the page. Rant begins after the flip.

Three paragraphs back, I asked you to take "race" out of you interpretation of the pictures.

Unfortunately, in our society we have not reached a point where we are, in fact, race neutral.

Instead of moving us farther down the egalitarian path, the election of our first Black President has made more visible some of the latent racial hatred that we have yet to eliminate.

I do not play the race card lightly. Read my body of work here. And, know my life. I have never used race or difference as a way of justifying disparate treatment.

But, at the same time, I have to question why the Slimes chose to present these four Black athletes in this "line-up" manner when they have NEVER done it before with the white athletes at sc.Or here. Or anywhere. Do you recall a similar picture gallery of the sc players who posted and maintained that hateful website?

They chose to give the pictures an interpretation that does not fit the story.

How can I say that?

Because, no one knows what the story is. No one accept CRN, the coaches, the team and the AD. The alleged offenses have never been made public. What little we know is that there are no public reports of criminal activity. That CRN acted quickly and decisively. And, that those of the four who have spoken out have taken responsibility for what they did.

At a time when we are thin in our defensive backfield, and when our first string running back is out, CRN stepped up and suspended these players, all of whom would have seen game action.

THAT IS THE STORY. That UCLA has high standards of conduct. That we enforce them, to our detriment. And, that our players take responsibility for their actions.

This should have been a positive story. Instead, it was a vapid story with sensational photographs.

One last thing. I cannot wait to see what Kurt Streeter has to say about this -- Streeter who has seen racial implications in stories before (even when many others could not). Certainly, the man who defended Karl Dorrell and claimed he was the victim of racial prejudice will do the same for these four Bruin athletes. I can't wait.

PS. No, I don't read the fishwrap. It is not a part of my life. I only saw this article because a good friend called me, upset and asking for a "reality check". Unfortunately, we both saw the images the same way. I felt moved to write about my feelings.