After Being Shamed, The Los Angeles Times Caves To Bloggers From Bruins Nation

Share All sharing options for: After Being Shamed, The Los Angeles Times Caves To Bloggers From Bruins Nation

Earlier today Class of 66 put up a post on Bruins Nation calling out the Los Angeles Times for posting racially charged "line up" photos of four of UCLA's football players who were disciplined by Coach Rick Neuheisel for violation of unspecified team rules. If you hadn't seen the photos that 66 and many other BNers called out in the commend section, you can check them out here.

Well it looks like the message was received by the LA Times loud and clear. Within hours they decided to change the picture and update that story with the following shot (HT Bruins102NCAA): 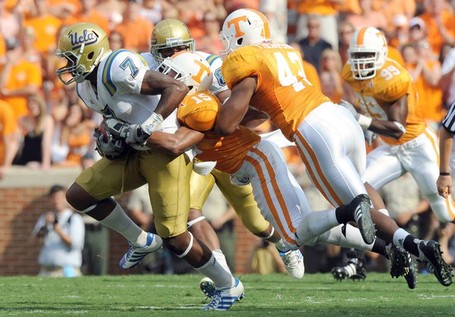 The caption of the photo now reads:

See, that wasn't so hard. The question is why they didn't do this in the first place?

It's a welcome step by the LA Times. However, it would have been better if they offered a credible explanation and apology to those four kids and the UCLA football program. Either way big ups to Class of 66 and rest of the BNers who had chimed in throughout the day for leading the charge.

There should be no doubt left now that the LA Times is paying attention.