Let me start by saying that this week's quiz will not ask you to guess why four players were suspended for this game with the funniest guesses (with me as judge) scoring points. I mean, that would be funny -- but maybe it wouldn't be so funny.

So, let's stick with Kansas State. 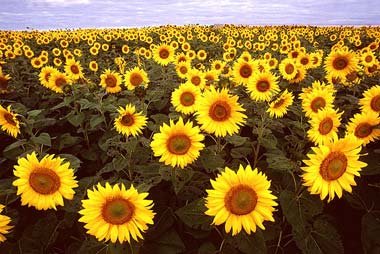 (The state flower of Kansas is the sunflower. Source: statesymbolsusa.org)

I gotta admit, I don't know a lot about Kansas State. I know the school is located in "Manhattan" -- but it's the one without nightlife, taxi cabs or decent Chinese food.

I guess the truth is, I don't know much about Manhattan, Kansas.

There is really no excuse for that. I consider myself an educated person, what with my degree from one of the finest public universities in America. There really is no excuse for me not knowing all there is to know about Manhattan, Kansas.

In fact, let's pause for a moment and learn a few things about Manhattan, Kansas, using Wikipedia as our guide. Yes, I know that Wikipedia is not a real source for anything. Yes, I know that moments before I clicked on the Manhattan, Kansas entry someone could have edited the page and introduced some misleading or wrong information. (You political science undergraduates take note: Using Wikipedia as a source in a term paper for Professor Spiegel's class is not a good idea.) And, yes, I'm pretty sure that even though I'm reading it on Wikepedia, that Manhattan, Kansas may or may not be the Jello-wrestling capital of the Midwest. It might be true, but I can't be sure. So, with that caveat in mind, let''s learn a little bit more about the city that likes to call itself "The Akron of the Sunflower State."

Early Manhattan settlers sometimes found themselves in conflict with Native Americans and the town itself was threatened by pro-slavery Southerners, but the proximity of Fort Riley protected the settlement from the major violence visited upon other Free-State towns during the "Bleeding Kansas" era.

Tuttle Creek Reservoir is located 5 miles (8 km) north of Manhattan. The lake was formed when the Big Blue River was dammed for flood control in the 1960s, and it is now a state park that offers many recreational opportunities. South of the city is the Konza Prairie, a tallgrass prairie preserve jointly owned by The Nature Conservancy and Kansas State University.

The area receives nearly 35 inches (890 mm) of precipitation during an average year with the largest share being received in May and June—the April–June period averages 33 days of measurable precipitation. During a typical year the total amount of precipitation may be anywhere from 24 to 46 inches (1,200 mm).

The largest silo in the Midwest is located in Manhattan. In deference to its sister city, locals refer to it as "The Empire State Silo."

I hadn't realized that Tuttle Creek Resovoir was formed when the Big Blue River was damaged for flood control in the 1960s. You learn something new every damn day, don't you?

Okay, on to the game. What can I really add to all that my fellow front pagers and the Bruins Nation readers haven't already said/written about tomorrow's game?

1 - While Kevin Prince sips his meals through a straw, Kai Forbath becomes even more important. True or false, Kai will make three or more field goals this week against the Manhattanites?

2 - Within 20, how many yards will the Bruins pass for in the game against the 'Cats?

3 - I was going to ask how many interceptions Kansas State would run back for a touchdown, but that would be gratuitous -- and it would also imply I knew who was going to start at quarterback. Instead, I'll ask --name a Bruin who will rush for a touchdown on Saturday.

As always, please put your answers in the subject line of your comments.