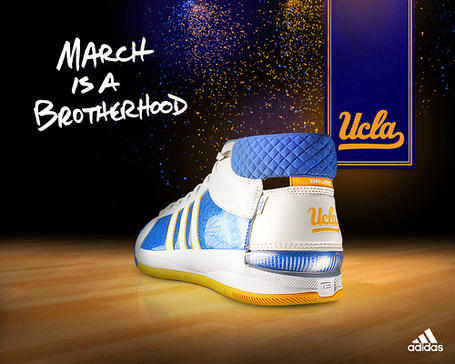 With UCLA's contract with Adidas set to expire this upcoming summer, there have been some rumblings as to who would be the Bruins' next apparel, footwear and equipment providor. Adidas is favored by some and is perceived to provide better equipment and footwear for the non-revenue sports. Adidas has come under fire though because they do not market the products as well as some would like and there have been rumblings of sub-par selection or equipment, specifically related to football footwear.

Some people detest Nike, whether for their history of using template uniforms, shoddy apparel, footwear and equipment or even for social reasons. Others believe Nike can be extremely beneficial to the Bruins because their merchandise reaches a larger audience and is better marketed. They come away steamed when stores carry USC stuff in all different styles, but either none or little UCLA stuff. An argument could be made for or against the Beaverton, Oregon behemoths.

There is also the new guy on the block, Under Armour. The young company's rise in the sports world is remarkable and it has certainly made a name for itself in recent years. Now, you can see teams like Maryland, Auburn, S. Carolina and Texas Tech outfitted in Armour Armour gear, while they have also become the official footwear supplier for the NFL. While the company's rise is breathtaking, it is still a young company and does not offer the same range of equipment and footwear that Nike or Adidas may offer, especially with regards to smaller sports.

So all things equal, who would you like to see the Bruins partner with beginning next fall? Assume the money offered is equal, as is the length of the contract. Depending on your personal priorities, your reasoning can focus on the asthetics, the functionality, the marketing, the availability or the quality of the product. Judge these companies any way you would like or even throw another company's name in there. Have at it.