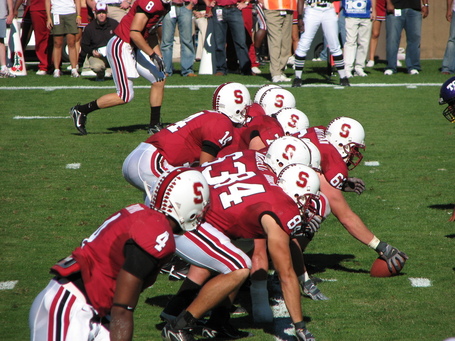 After watching a few games, I have found a few different trends and weaknesses... and strengths in the Stanford offense and defense. I'll try to really dissect the pictures that I have collected. So here we go!

The first thing that really jumped out at me while I was watching the Stanford defense is their alignment, which is really awkward, especially since they don't have the right speed to match up with everyone so here's the picture. 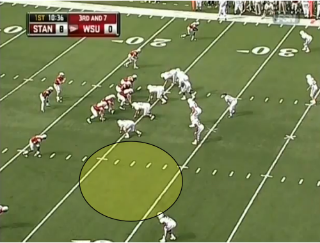 Notice the close LB, he should, at least, be splitting the difference between the slot receiver, and the right Tackle. Because of that space, there is an immediate void between him and the not only the slot receiver, but the running back. Here's how the play developed: 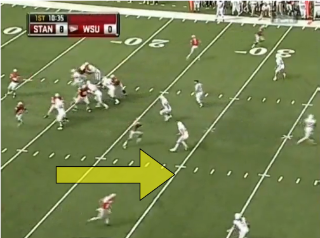 The Slot receiver runs a slant against the zone,forcing everyone to move back. This covers the entire deep portion of the field, but this new cushion allows Montgomery, the upper left guy running towards the camera, to have at least 10 yards to make a move and adjust to the coverage. Here's the easy read. 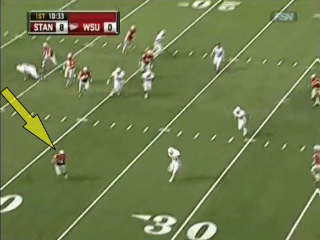 Open space, and an easy first down. If UCLA want's to move the ball without taking risks, the flats, especially against the Cover-3 principle shown above, are the best place to go against the inexperienced Stanford LB's, who don't have quite enough speed to really get over to the flats in time.

Cover 3, in contrast to Cover 2, uses three men, often a corner, and 2 safeties to cover the three zones in the deepest part of the field. Cover 3 is great against the long ball, not the flat passing places. Here's Monte Kiffin's cover 2 breaking down from a blitz. 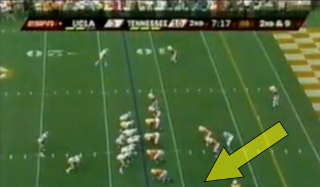 That same open space, which was evenly distributed here by a better defense, still ended up hurting the Vols. Everyone remembers what happened here. The LB's blitzed, passing up Chane Moline, leaving him 1 on 1 with a corner, similar to Stanford play. To attack these two principals, you are going to need to run off the corner with a streak, force the LB's to keep the play in front of them with the crossing WR, and then quickly reach the flats, with a RB, TE, or FB, which already got us 6 against a superior defense. 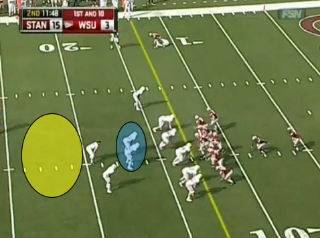 Following up on the point about the LB's being the weakness for the Cardinal, I found another play the really showed it. The guys in the blue circle are two backers, strangely close together. Their zone is right behind the ref in the yellow circle. They can either cover it, or cover the 3-5 yard zone... leaving a massive hole in the middle of the field. 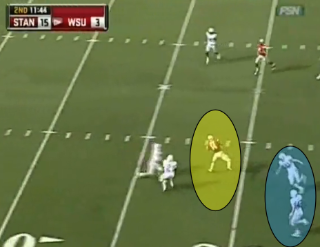 Hmm... Wrong choice. Against WSU too... hmm... these two backers seem pretty inadequate, they still have the same spacing and everything. Big weakness. Hopefully we can exploit it with our bigger WR's like Embree, Rosario, and Presley. 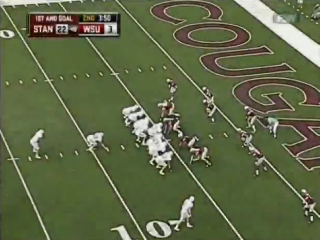 Their blocking involves something called chip-blocking, or 2 level blocking; first, their will usually be a double team on the D-Tackles, then the strong, or play side blocker would chip off to block the second level, and let the running back show his stuff against the 3rd level. It works, more often then not. Here is how WSU stopped it though. 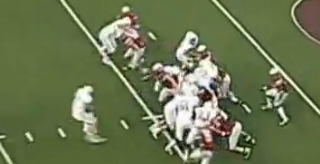 The LB's crashed the offensive line when they saw the separation, then the backside line didn't give up on the play and eventually got to Gerhart while he was still looking for the hole. This was the result. 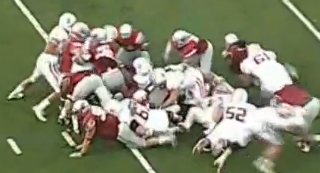 Nice stop. For once say the Cougs. Well they just mastered the art of stopping a pretty good blocking scheme... for one play at least.

Here's another look at zone blocking.

Notice the double-team In the middle, they're blocking the second closest lineman. 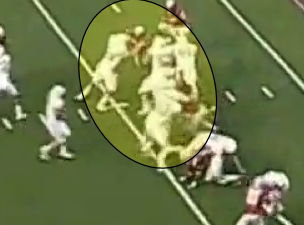 The tackle moved over to block the backer correctly, leaving a massive hole for Gerhart, TD Stanford.

In conclusion, this is how you can beat Stanford:

I'm really pumped for this game because of how important it is for the Bruins. Another thing that UCLA has going for them is the revenge factor. Revenge is the most overrated motivator in the world, just ask Penn State or Ohio State.

I hope you enjoyed it!