Share All sharing options for: Updates: Chow Excited About UCLA, Didn't Return Kiffin's Calls While Barkley Was "Dreaming" About Chow At U$C

Norm Chow, Rick Neuheisel's offensive coordinator will be holding a presser at 1:30 pm PST. Jon Gold will be providing rough transcripts on Inside UCLA blog as much as possible. Not sure if it will available on radio or online. I am sure we will be updating when more news break out of it and wrap our heads around.

But here is something to consider for all recruits around Southern California and around the country (who can read and write and have qualifying SAT scores), here is what the starting Trojan QB Matt Barkley told a reporter less than 24 hours ago: 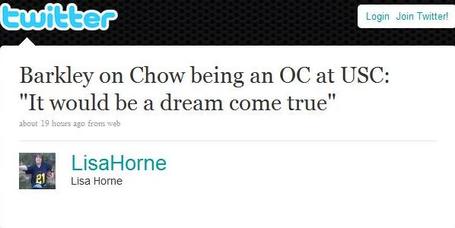 Don't really have to add to that except to say thanks to Matty, Mike Garrett and the entire Trojan echo chamber for building up our offensive coordinator for last 48 hours. We really appreciate it. I am sure CRN and the entire UCLA staff working their tails off on the recruiting trail as well. lol

Good luck with "Coach Kiff" Matty. If we see more Chow related updates we will update it as we see fit in this thread through the afternoon.

Xavier Grimble could not be reached for comment Wednesday but wrote in a text message Tuesday: "I've always been committed so now (I'm) just excited to talk to Lane Kiffin and Norm Chow."

Hey Xavier, funny you mentioned that. We are excited about both of them too! But you can only play for Chow at UCLA. GO BRUINS.

UPDATE II (N): We have Chow's words. He is excited about Westwood:

"I'm awfully excited about what's going on here. I feel badly, I know there were requests for me to return calls, and it wasn't the time. After some consideration, we're awfully glad that we decided to stay."

UPDATE III (N): Chow's comments are pretty revealing. He is not worried about the money:

And he is not also worried about how extension is going to work out:

Is UCLA working on an extension?
"Rick and I have talked, but UCLA works a little different as a public institution. That's not the concern."

He sounded incredible gracious about his head coach stating that "you come to UCLA because of UCLA, of Rick Neuheisel, not because of Norm Chow," and upset about the rumor mongering:

Were you upset with how this went down?
"No question. Somebody told me and I hadn't spoken to anyone. That was very, very unfair."

He also explained why he didn't want to waste time talking about this story. This guy sounds totally at peace with himself at UCLA.GO BRUINS.