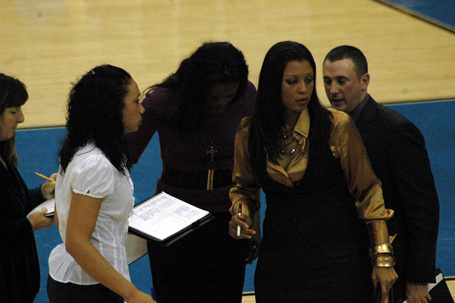 UCLA completed the first half of the conference season today with a dominating performance against Oregon State.  After playing an up tempo, high scoring game against Oregon two nights ago, OSU presented a completely different style of game, with Oregon State allowing the lowest field goal percentage in conference.

The game started off rocky for UCLA, as the Bruins took over 4 minutes to score their first point, but due to strong defense, were only down 6-2.  After a 6-0 start for the beavers, scored 9 in a row to go up 9-6 with 11:38 to go.  OSU retook the lead at 10-9, but  they wouldn't score again for over 6 and a half minutes as UCLA went on a 15-2 run to go up 24-12.  UCLA finished the half up 31-14.  It was remarkable because UCLA's three main scorers, Jasmine Dixon, Markel Walker, and Doreena Campbell combined for only 2 points and yet UCLA was up by 17.  Rebekah Gardner really picked up the scoring with 11 points, with 3-4 shooting from 3 point range.  UCLA forced 17 turnovers in the first half alone, which left OSU with very few scoring opportunities.

UCLA scored 6 straight points to start the second half, and from there the game was out of reach.  OSU never got closer than 21 points, and UCLA built their lead all the way up to 35 points, and OSU barely broke 30 until garbage time when they made a few meaningless baskets to make the score closer than it really was.

Looking at the box score, very few things went in OSU's favor.  They did out-rebound the Bruins 32-29. UCLA also committed 18 fouls against only 8 for OSU, giving UCLA only 4 free throw attempts.  It was definitely curious since UCLA plays such an intense, interior based offense that UCLA normally goes to the line around 20 times a game so UCLA seemingly didn't get the calls tonight, not that they needed it.

Everything else was all bruins.  UCLA shot 50% from both the field and 3 point range, while OSU only shot 39% .  UCLA forced a staggering 29 turnovers, while committing only 16.  UCLA sliced through a good OSU defense with 21 assists on 32 baskets.  UCLA scored 50 of their 70 points in the paint, and our bench outscored theirs 29-9.  3 Bruins scored in double digits, and for the first game in a while, it wasn't Jasmine Dixon leading the team.  Markel Walker had 16 points, to go with 11 for Rebekah Gardner and 10 for Jasmine Dixon, all in the 2nd half.  Darxia returned with a better game, with 8 points on 50% shooting.  Doreena Campbell had a rough game with no points on 0-7 shooting, but UCLA's depth and multiple scoring options allows the team to have 1 or 2 players have an off night because others are going to step up.

Here are some great pictures from b d from the game

UCLA finishes the first half of conference season 14-6 (7-2), which is really something to be thrilled about.  UCLA's 7-2 start to conference is the best start since 1999-2000, and only the 4th time UCLA has had a 7-2 record or better after the first half of conference play.  The day only got better for UCLA, as USC got upset at home by an Oregon team on a 5 game skid, and Cal blew a sizable lead at home against ASU to lose at the buzzer.  What this means is UCLA is now in a tie for 2nd place with USC at 7-2 (and we host the rematch game), and have a 2 game lead over the next closest teams in conference thanks to Cal's loss. UCLA will now have to travel to the bay area for the hardest road trip in the conference, so it is critical for UCLA to at least manage a split if possible, making the Cal game very important.

Here are the Pac-10 standings after the first half of conference: