A Losing Basketball Season Will Never Be Acceptable At UCLA

Share All sharing options for: A Losing Basketball Season Will Never Be Acceptable At UCLA

During yesterday's discussion I mentioned multiple times that a losing season will never be acceptable at UCLA. I wanted to offer up some numbers from other coaches to back up that assertion.

First of all going into this season the expectations were fairly modest. This was reflected during our podcast and its accompanying comment thread on November 11 right here on BN. We had speculated going into this season that given all the departures from last year we would be looking at a season in which we would be shooting for 18 wins with few games as tossups. We were looking for a rebuilding season in which the team would sneak into the Big Dance as a lower seed and then set it up for a very good season (win in the mid to high 20s range, a run for the Pac-10 championship and a high seed in the tourney) next year.

We certainly weren't thinking about going to the NIT and most importantly we weren't thinking about a losing season. That is not being unreasonable on our part. Now as we look at a real possibility of total implosion and a losing season in 2009-10, we need to put in perspective. We have always thought of Ben Howland as one of the best coaches in the game and the internets are littered with validators from reputable sources who also back up that assessment.

So, I went ahead last night and went through the records of coaches like Tom Izzo, Jim Calhoun, Mike Kryzweski, and Jim Boeheim to see how their teams fared during their "worst" seasons after they had established themselves as an elite coach (winning the National Championship. I know that Ben Howland hasn't brought home a banner but I think it is reasonable to bring up the names of the coaches above given his incredible to run to three straight Final-4s. Well here are the numbers: 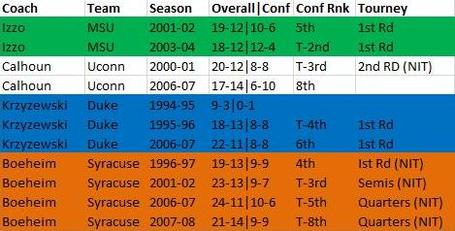 Also note, that K's 1994-95 record is incomplete because during that year he took a leave of absence due to back surgery and exhaustion. Of course there are four names missing in this chart. Roy Williams, Bill Self, Rick Pitino and John Calipari. Williams and Self have never missed the dance while they were coaches at Kansas, Ilinois and North Carolina. I thought bringing up Pitino and Calipari's names is pointless given their shady and gross off course baggage. I don't want coaches like that in Westwood. So don't care about them.

Anyway, going back to the chart here are the datapoints that stuck out to me:

So, yes I realize Coach Howland is dealing with a "perfect storm" sort of. However, at the same time he is also responsible. It shouldn't have been a big surprise to him when recruits like Love and Holiday left for the League just after 1 year in the program. At the same time he is also responsible for putting together a competent coaching staff who should be able to do a through evaluation before assembling recruiting classes to make sure they minimize the number of misfits in the program.

While Drew Gordon was an extreme case, he wasn't the only kid to transfer out of the program. We also have seen the transfers of Ryan Wright and Chace Stanback, and we will probably have more after this season. That is on Howland and his staff. Elite coaches find a way not only to bring in the best recruits but also make sure they are doing what they can to keep the motivated also doing their best to retain them in the program (See Bellerophon's post exploring the issue on retention in Howland's program). That also creates the responsibility of not just finding the most hyped recruits but also the best fit for that coach's program.

Now, perhaps it's a little premature on my part to declare this as a lost season. However, when I look at our schedule I just don't see how it is going to be salvaged if we keep sticking to the same rotation and same philosophy which seems to have resulted in a demoralized and uninspired basketball program. I will be surprised if California, Washington, Southern Cal (who BTW are playing classic Ben Ball and are fun to watch), Arizona don't humiliate us on their home courts or at least win comfortably. Good chance all of those teams might sweep the season series. Similarly I don't have much reasons to feel confident about any of our matchups with rest of the Pac-10. From what I saw over the weekend, it appeared to me that every team in the conference is playing much harder and with more passion than the current Howland coached UCLA program. So yeah not seeing how Howland can salvage a winning season at this point. Now, moving forward I wanted to put the numbers above in context. So more on that after the jump.

I also looked into the records of those coaches in the season immediately before and after they had those tough rebuilding seasons:

In Izzo's case he followed up his rebuilding seasons with runs to the Elite Eight and the Final-4. Calhoun followed his tough seasons with a run to the Elite 8 and a 24 win season, in which UConn finished 3rd in the conference. Boeheim is the coach who flirted with NIT appearances a lot. Still he followed them up runs to Sweet 16 in 97-98 (winning the Big East Conference) and the NCAA championship in 02-03. His recent history was a bit tougher when he put up two back to back NIT seasons but both of them were 20+ win seasons and he then eventually appeared to get it together with a run to Sweet-16 last year. Looks like he is off to a strong start in this one.

So, I think we need to keep all these data points as we trudge through rest of this season. I am all for being patient and having perspective. However, I am not going to compromise our standards and somehow accept a losing season at UCLA. No way. No how.

I realize Ben Howland's first year was a losing one. However, I never counted that record on Howland because it was a result of the total decimation of the program under the previous "poser" of a head coach. However, if this year results in a losing record, Howland will be solely responsible for it. He will have to fix it without making any kind of excuses and taking definitive measures to ensure that it never happens under his watch in Westwood.

Now, note very carefully. There is no way I am suggesting that UCLA should be firing Ben Howland if we end up suffering a losing season in 2009-10. That is not the case. However, what I am arguing is that if this season ends up being a losing one, there will be no excuse for it and should end up putting Howland under pressure to not only produce a 20+ win season and a tourney run next season, but he also needs to instill confidence that a losing season in 2009-10 was nothing short of an aberration.