As we prepare for certain destruction against Oregon, I think it is necessary to understand why we are going to be destroyed in Eugene on Thursday night.

So here we go. Akeem is the guy in blue for all diagrams (marked by an "A" as well); Man in Green Triangle is the read man.

Oregon has 5 simple (ha, simple) concepts that I found in their game against Stanford. 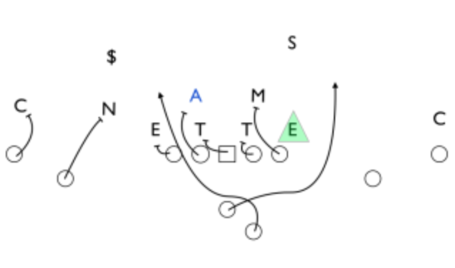 This is really the basis for all spread option offenses. The Zone read is basically a number game, taking 7 offensive players, blocking 5 of 6 defenders, and reading the remaining defender. If the defense can't get off of their blocks, it is guaranteed to have 8 to 10 yards every time. However, one missed block creates a mismatch for the offense, often spelling disaster in the backfield. Against Stanford, you'll see how the 3 man front gives Thomas problems at first, but eventually, he figures it out... oh, he figures it out.

Here is Oregon running it against Stanford: 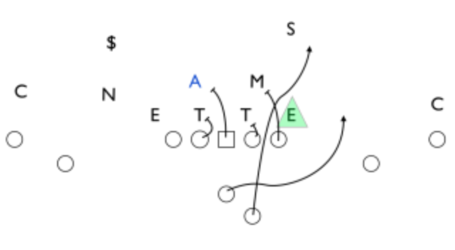 If you were lucky enough to watch Taylor Martinez and the Nebraska Cornhuskers tear up Kansas State, the inverted veer, or counter veer was a huge play for these guys. However, if you run into a defensive end, like Sam Acho, and potentially like Akeem Ayers, this play is garbage. It works better against a three man front, as you'll see in the cutups below... also, I called the plays below Veer plays because of the QB's footwork; the play-side end is the read-man, instead of the backside end, but against a 3 man front, Oregon's offensive line adapted a more zone oriented look, making it look like a funky zone read. This play should be called the inside zone, the QB did not put his point of attack on the outside, but used Oregon's bread and butter "inside zone"

This is my personal favorite play for option teams, whether its in Flexbone or in the shotgun like Oregon can run it, it is really easy to run and really effective. When Urban Meyer played Glenn Dorsey (LSU's legendary DT) they decided, let's just not block the guy, and read him. It worked. Oregon quickly picked it up, and now, in order to combat the scrape exchange, multiple spread option teams picked it up. Navy, Georgia Tech, and Air Force never got credit for it , so there it is.

The play involves reading the 3 technique, or the guy on the outside shade of either guard (my diagram is inaccurate, I realize that), so again, you didn't see much of it against the Cardinal. But when Stanford showed or tipped their blitzes, it worked like a charm. I'm not sure if it is a lineman choice thing, or if it is predetermined, but it sure looks like the Offensive Line is given a direction and chooses who to leave for the read, and who to block IMO. Call me stupid, I'm not sure. 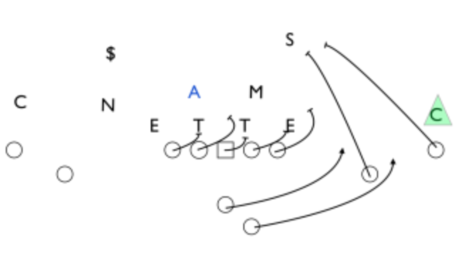 Mother of all Spread Option plays IMO. In its resurgent stages for the Ducks, it was a staple in short yardage and goal line situations. Very hard to defend against a lanky QB with plenty of speed like Thomas has. They'll be running away from Akeem, no doubt, and towards Price or Viney, no doubt. 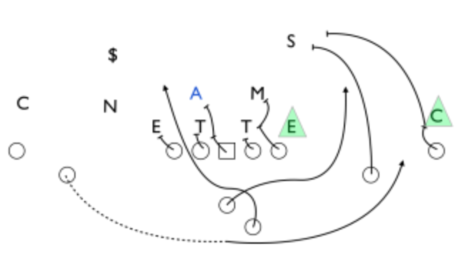 This play wasn't used very much against Stanford, but it sure was effective. It is quick working, and can get TD's in a hurry. 2 TD's in 3 attempts, one for a 76 yard run... not too shabby. The QB treats the backside end as he would on a regular zone read play: if the read-man crashes he keeps, but now, he has an extra option with his pitch man from the motion, he'll read the Corner, or Nickel-Back for that pitch-back.

This concept has been covered before, but here is the gist of it for Oregon. If you load the box against Oregon, one mismatch they can exploit is the bubble screen; covered and explained here. Remember, Oregon adds a wrinkle to their zone read play, or can straight up run a bubble screen.

These videos include the straight up bubble screen, with little misdirection, and the actual read process. Now remember, if you attack the screen with your corner, the streak or slant from the inside receiver, not the slot man will be wide open. One disrespected player = TD against Oregon.

Another main concept that Oregon used against Stanford was the Norm-Chowesque Post/Curl Option w/ Wheel Combo concept (that's a mouthful). Due to limitations in the film, I can only take what I see, but it seems like it is following those patterns throughout my cutups. It is, without a doubt, their favorite vertical passing concept.