All Ominous/Discouraging Signs Point to a Bruin Bloodbath in Oregon

Share All sharing options for: All Ominous/Discouraging Signs Point to a Bruin Bloodbath in Oregon

Well it sure looks like the people who had been loudly clamoring for Richard Brehaut are about to get their wishes. All signs out of Spaulding points to number 12 either starting or getting significant amount of playing time during what is likely to be shaping up a Bruin massacre in Eugene.

Kevin Prince didn't practice on Monday and had another precautionary MRI on his injured knee:

Prince said the MRI was precautionary, and he quickly shot down the idea the current injury is related to the torn ACL he suffered before his senior year of high school.

"Simply because it wasn't necessarily getting better," Prince said about the decision to have an MRI done. "We've been trying to do different things, but it hasn't been improving as fast as we'd like it to. We want to get a good picture of what's going on in there."

Either way given that with just 2 days left till game day and yesterday was one of the most crucial days for practice, it is highly doubtful Prince is going to be starting on Thursday night. Norm Chow is trying hard to be coy about all this:

Offensive Coordinator Norm Chow  said that even if a decision has been made on a starting quarterback for Thursday's game, the Bruins would be unwise to announce it.

"If we say Richard is that starter, they go watch the Washington State tape," Chow said. "Now, they're not sure and they're going to look at all the tape. We would be foolish to give away our guy now."

And right now it looks like it will not exactly be the smartest thing to do if UCLA coaches go with Kevin Prince in Eugene. Either way Bruins are screwed. Even with a healthy Price Bruins would have been an impossible situation against the explosive Ducks. With Brehaut at the helm, you can expect a violent, fired up Oregon defense coming after an inexperienced UCLA QB, operating a predictable, watered down Bruin offense. It is not going to be pretty.

Well to break up the grim reality just for a bit, though we inject a little levity in this whole QB mess. Here is how Chris Foster, the "bear reporter" for the Trojan Times hack "reported" news from yesterday's practice: 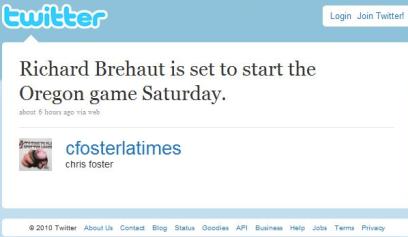 That's right. Foster - a "beat reporter" - getting paid by what is supposed to be a credible paper thinks the game is on Saturday. Why is this clown allowed to "cover" UCLA again? lol

As for going back to our issues, here is Coach Rick Neuheisel talking about a "crisp" practice last night:

However, the reports indicate that practice overall was anything but crisp. From Jon Gold in the Daily News blog:

*[S]till seeing too much push on the exterior offensive line in pass protection. Expect Oregon to be extremely aggressive after watching that Cal film. Norm Chow will need to have a couple screen passes in the works, though screens have not been this team's strong suit he last couple years.

* Brehaut was not effective in 7-on-7 drills, including red-zone work toward the end of the session. Brehaut completed 2-of-6 passes, including a dump-off to Johnathan Franklin and a touchdown up the middle to Cory Harkey. Courtney Viney had a great pass breakup, Rahim Moore had an interception, Brehaut overthrew Ricky Marvray and was sacked once.

FWIW Gold did note that Brehaut looked "fantastic at times" and "much more comfortable" than he looked last week, the reports about him were mostly negative. Moreover, the feedback we have heard re. Darius Bell is not all that encouraging either.

Also Gold has the following notes on "bumps and bruises":

Neuheisel said it was becoming increasingly evident that the team would be without the services of starting sophomore cornerback Sheldon Price (knee) against the Ducks' powerful offense. Junior Courtney Viney and sophomore Andrew Abbott got most of the reps with the first-team defense, along with sophomore Aaron Hester, who has started all six games for the Bruins' this season. ... Junior wide receiver Nelson Rosario is still out with a sprained ankle, and his return for Oregon is doubtful. ... Linebacker Glenn Love, safety Dalton Hilliard (shoulder) and F-back Anthony Barr (calf) are back practicing, as was defensive end Keenan Graham (hip flexor) and running back Jordon James (hip).

The news about Anthony Barr, Dalton Hilliard are encouraging. We are going to need those guys but not sure how much it is going to help.

At this point it is not rocket science what Nick Alliotti and the Ducks will try to do to the Bruins on Thursday night. They are going to stack the box - just like Cal did - and dare the Bruins to beat them with our feeble and non-existent passing attack. Given our OL is not very good at pass blocking, our receivers are not very good at catching, and we are going to go with an inconsistent, young QB only making his second start of his career, not sure how much analysis is really necessary at this point to picture how it is going to go for the Bruins.