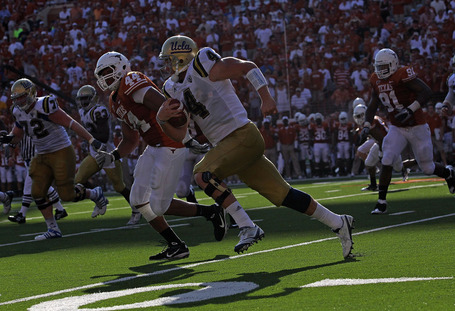 Kevin Prince underwent arthroscopic surgery on his right knee today.  Surgeons repaired a torn meniscus cartilage and also performed a microfracture procedure to assist in healing the cartilage.  As a result of this extensive procedure, he will not play football again this season.  Prince injured his knee in a win against Texas on Sept 25.

Prince has certainly had highs and lows as the Bruins QB during his UCLA career, but there can be no questioning his heart and dedication to the team.  It is awful when injuries occur, but it is an ugly reality of the game.  Unfortunately, it has been all too common an occurrence for Kevin thus far.

We wish Kevin a speedy and successful recovery, and will look forward to him returning to the field when he is ready in the spring.

For anyone interested, there is a good resource on meniscal injuries an the Steadman-Hawkins Clinic web page (yes, this will be on the test).   Essentially, the meniscus is a thick cartilage layer on top of the tibial plateau within the knee joint.  Healthy cartilage is important for joint stability, smooth range of motion, and the ability to tolerate compression by the joint. Because cartilage has relatively poor blood supply, it heals slowly when injured.

Microfracture surgery is a technique employed to improve healing in certain cartilage injuries.  During surgery, multiple tiny fractures are created on the tibial surface, causing local bleeding.  The blood and elements of bone marrow leaking from the fracture site bring various cell types and proteins to the area which promote healing and regeneration of the damaged cartilage.

Though the procedure is relatively simple, the patient is usually on crutches for 6 weeks after surgery, and must follow a fairly intensive physical therapy rehabilitation schedule.  Athletes typically do not return to full activity for 4-6 months.