As the regular BN readers know, I'm a regular reader of Paul Lukas' very good UniWatch blog. Obviously, uniforms are secondary to whether our teams are able to win, able to compete, and able to represent the university well on and off the field.  That being said, uniforms and aesthetics are something that should be important to an elite athletic department, especially when it comes to building the UCLA brand and promoting the university to a national audience.

Think about iconic uniforms: the Alabama Crimson Tide.  The Texas Longhorns.  The Penn State Nittany Lions.  No flashy gimmicks, no mismatched colors, no bastardization of the uniform by some half-ass shoe company.

UCLA?  Yeah, we're stuck with garbage uniforms that look like they were borrowed from some Pop Warner football team.

Who is to blame?  Adidas.

But not only have they totally bastardized our football uniforms, they've tweaked our classic basketball uniforms, with questionable results.  Let's break it down after the jump.

So, what happened?  Let's start with some images and break it down, beginning with the half-ass job Adidas did with out football uniforms.  Compare the two images below: 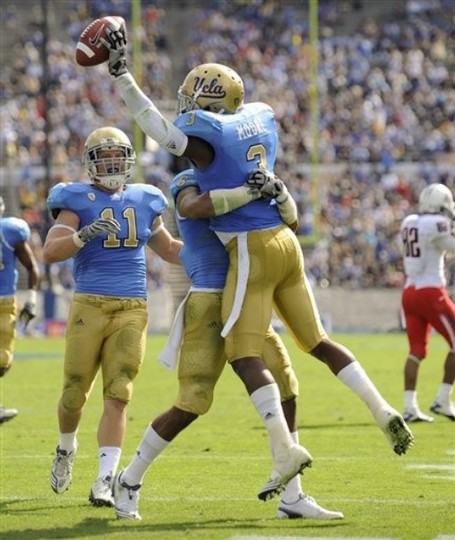 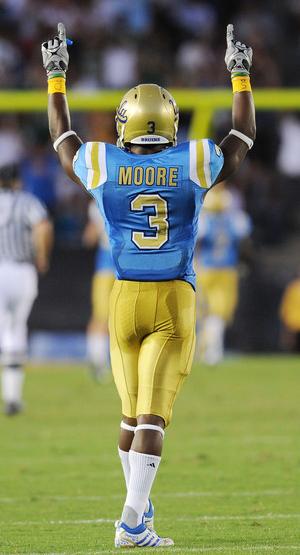 See the difference?  First, let's talk about our iconic UCLA stripes.  You know, those shoulder stripes that were developed under Red Sanders in 1954.  At the minimum, they should run from the armpit around the top of the shoulder to the edge of the armpit, as illustrated in the second Rahim Moore image above.  Now look at the first Rahim Moore image.  In fact, let's look at a better angle: 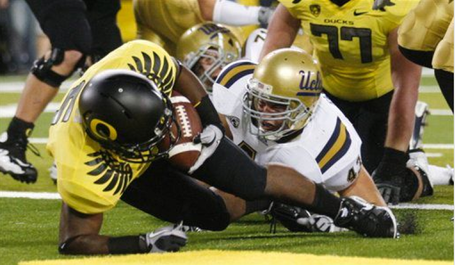 That just looks terrible.  They took something iconic with our uniform and bastardized it. Flat-out made it lame.  Or as the fine folks at UniWatch said:

But the saddest part was the team’s UCLA stripes, which were severely truncated and often distorted. I mean, come on, people — this is UCLA, the school that invented UCLA stripes, and you’re gonna leave them with this? That’s just pathetic.

But that's not the only problems these new joke uniforms have.

Take another look at Taylor Embree above.  Notice how small his 82 is on his sleeve?  Yeah, that's right, Adidas went ahead and shrunk the side numbers as well.  Compare Richard Brehaut against Oregon (the first game with these new garbage uniforms) and Brehaut against Stanford (when we still had our other uniforms).  Notice how the number shrunk to the point it looks kind of ridiculous.

But what really takes the cake is the cheap, not-matching, screen-printed by some stoner drop-out at the mall, names on the back of the uniforms. Look up at Rahim Moore in the second image.  Notice how his name matches the number on his back?  Gold trimmed in navy blue, like the numbers.  It matches and it looks good.  Now take a look at Rahim Moore in the first image.  Or Taylor Embree at the top.  Notice something amiss about their numbers?

They're plain white.  No gold.  No borders.  Just plain white letters, which don't match any part of the uniform.  It looks cheap.  It looks like the equipment manager forgot to put names on the jerseys, ran out of time, and took them all over to the nearest Westfield Mall and had some chump screen-print some names on real quick before kickoff.  It's pitiful and just shows how lazy Adidas is when it comes to our program.

Actually, I'll again defer to UniWatch, since they sum it up so much better than I:

It’s a little hard to tell from the game photos, but the [name on backs] on UCLA’s super-stretchies looked like total shite.

Can't argue with that.

I used to be an ardent supporter of Adidas.  After seeing these jokes, I'm now a full-on Nike man for this program.  Obviously, seeing the way they've flashed up Oregon, Cal, and threw up those weird sports-bra looking Oregon State uniforms a few seasons ago, I was hesitant and worried that Nike would f**k up our classic uniform. But then again, they've done good work keeping U$C, Alabama, Texas, and Penn State true to their classic uniforms, so it can be done.

It's bad enough Adidas has totally butchered our football uniform, but they've tweaked the basketball uniform, with questionable results. As confirmed by the Wisconsin athletic department:

Today, adidas and University of Wisconsin teams unveil the lightest and most technologically advanced college basketball uniforms ever.  Designed and developed by adidas, the uniforms are 30 percent lighter and dry twice as fast as previous uniforms to help enhance the Badgers' performance by keeping players cooler, drier and more comfortable on the court. . . .

In addition to the NCAA teams wearing the new uniforms, all 30 NBA teams will wear Revolution 30 jerseys this season featuring similar adidas technology.

As we hashed out briefly here, these new Revolution 30 jerseys are more tight-fitting, but also Adidas tweaked the numbers and names on our classic uniforms.  Last year, we were in our classic uniforms, befitting Wooden's program. Now (thanks to our fine readers who shared pictures from the Westmont game!), as you can see here, the font on our numbers has been tweaked (HT to rookism), the gold border is thicker, the shorts' waistband is now plain, and the numbers have gotten larger.

Take a look at everyone's favorite recent Bruin big man, Kevin Love here.  Compare that to Tyler Honeycutt here, Reeves Nelson here, or Anthony Stover, Tyler Lamb, and Malcolm Lee here.  As you can see, the names on the backs of the jerseys have gone from straight-across to arched.  Not exactly a quality change, IMHO.  And you can notice the font change as well as the change in the shorts' waistband (which makes our shorts' look cheap, if you ask me).

All-in-all, these new Adidas uniforms for our two marquee programs are pretty alarming, especially since we just decided to keep them as our supplier.  If this is the best Adidas can do, then it's time for UCLA to seriously re-consider our decision and look into options like Nike or Under-Armor (Reebok is now owned by Adidas, so they're out as well).

Our guys look like crap and for an institution like UCLA to have such cheap looking uniforms is just sad.  We're not some second-rate WAC team.  We're the elite athletic program in the country and to be stuck with such second-rate uniforms is pathetic.

Another terrible effort by Morgan Center and the chumps at Adidas.

UPDATE (N): Added a poll on the frontpage. VOTE HERE to let us know whether you like or dislike the new uniforms. GO BRUINS.