Bumped.  BlueReign makes some great points on this disappointing season (B). 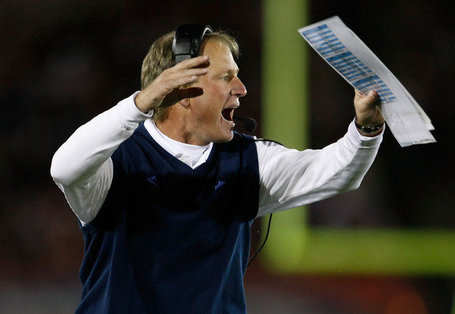 I’m pissed, you’re pissed, we’re all pissed at what transpired tonight and this season.  Most people had reasonable expectations of going anywhere between 8-4 and 6-6.  Yet, we find ourselves completing CRN’s 3rd year at 4-8 and 9th place in the final year of the Pac 10.

In the larger Bruin Nation, two dominant sentiments will emerge: Fire CRN now and CRN gets 1 more year.  Save yourself the energy because CRN will be back next year, if not longer.  Remember folks, this is UCLA we’re talking about.  The school that allowed KD and the Lizard to destroy once proud programs as long as the Athletic Department was turning in a profit.   If UCLA really cared about fielding competitive teams at championship levels, the university would allow donors to contribute so that we can bring in top notch coaches and assist the 2 major sports in other facets.   This is a complex topic that we can maybe get into another day.

I feel your pain and frustration but CRN deserves to get another year whether you and I like it or not.   Coaches at a minimum should get 4 years so that they can build their program with their players.  Otherwise, no reputable coach in their right mind would come to UCLA knowing that they will be terminated before they have ample time to establish their program.  Once again, let the "Fire CRN Now" demand go.

CRN has done a great job in celebrating our FB tradition by reconnecting with former players and having them become a part of the program once again.  CRN also has improved the talent level on this team by competing against suc and other programs for top notch talent.  CRN has also been able to bring in some marginal recruits (academically) that KD could not get past admissions as well. I know people are tired of the coach speak but CRN is working his mojo within the Athletic Department in this fashion. Thus, there are positive things that have been accomplished by CRN during his 3 years.  Having said that, we have yet to see CRN translate his accomplishments off the field onto the gridiron.

CRN gets 1 more year to bring back the pride we have for those 4 letters.  We’ve discussed these issues in the past but I’ll restate them because I believe these are "MUSTS" if our FB program is to return back to relevancy.

Right now, we’re the soft west coast Cali surfer boys. We’re the team that over pursues, drops passes, commits untimely penalties, turns the ball over, misses tackles, lack discipline, etc. We don’t exhibit the toughness, resolve, desire, killer attitude and creativity that is synonymous with the elite programs in the nation.   I have doubts as to whether we’ll become the type of team that opponents dread facing us because they know when they play UCLA, they better bring their A Game because it’s going to be a battle for 60 minutes.  My apprehension lies with the head man.  CRN is great at taking players on a white water rafting trips while serenading them with his guitar.  I doubt that CRN can be the hard ass that a Saban, Belichick and Parcells are.  However, he doesn’t have to be as we see the cerebral types like a Dungy and Paterno have success as well.  Whatever style CRN imposes, it needs to be the type that includes the attributes discussed above.

Now that the season is over, I think it is appropriate to state that I’ve read that our conservativeness on offense was predominately due to CNC.  Why?  I have no clue but I have read that CRN had a bigger role in the play calling duties against ASU.   The play calling in the ASU game was more creative than anything we saw earlier in the season.  Thus, the question now becomes what do we do with CNC?  If we’re going to run the Pistol offense as opposed to the Pro Style offense, I personally believe CNC needs to be let go.  I don’t think it’s in CNC to master another offense when he’s been running his offense which he has perfected for decades.  CNC is just a bad fit for the Pistol offense IMO.  Instead of bringing in a Pistol expert, I’d rather see CRN hire a OC in name who is an up & comer and who has potential to be a full time OC in the future.  I think CRN can call his own plays like other HC’s and I’d rather see some of that OC money be allocated towards bringing in a proven DC.

From what I’ve read, Bullough is gone.  Who we get to replace him will be crucial in determining our future.  CRN needs to get a proven DC this time around.  I’d like to see a tough nose, hard ass DC who doesn’t let anything get by him.  The sort of DC that’ll get a Hester to shut his trap and quit celebrating for making a tackle. There is a ton of young talent on the defensive side of the ball right now.  With the proper scheme and coaching, the young cubs could be a formidable bunch.   Moore, Hundley and Ganz should also be let go from the staff.   Moses shouldn’t get too comfortable either IMO.

This is a direct byproduct from the type of coaches we have.  For some reason, the talent that has come into the program has failed to develop.  What is even more troublesome is the lack of fundamentals in our program.  The failure to catch balls with your hands instead of letting the ball get into your body.  The failure to turn your head and track the football.  The failure to tackle or to hold onto the football.  Some people counter by saying the player was overhyped.  I don’t buy into that argument.   Good coaching will maximize the player’s talent no matter how low their ceiling may be.  There are plenty of mid major programs whose rosters aren’t full of 4 or 5 star recruits but they play like them although they were overlooked by the big time programs.   Simply put, our coaching has been pathetic at best.  If the level of coaching doesn’t improve within the program, we will never experience the kind of success we’re all hoping for.

I see a QB controversy brewing in the offseason.  You have KP who believes he is still the starter, RB who believes it’s his team and Hundley who is the ideal fit for the Pistol.  I’ve seen enough from RB to believe he should be our starter in 2011.  Yes, he still has many issues (locking onto receivers, stupid plays, etc.) but remember, he was a True Sophomore this year who didn’t have the benefit of a RS year nor did he get the amount of games to get experience and work out the kinks.  RB also didn’t have the confidence that a QB gets when he KNOWS it’s his team and the coaches tell him it’s his team.  Knowing the team is yours has a very powerful and confidence building effect on a QB.  Unless Hundley is head and shoulders above RB, I think the smart thing to do for Hundley and for UCLA FB is to RS him.  The only time I would advocate a True FR QB is when you have a veteran team with strong leaders and big time play makers on both sides of the ball.  As you can see, we are not that.  Thus, throwing a True FR QB out on the field can have disastrous results no matter how talented he may be.

As stated earlier, CRN has 1 more year to fix things.  We’ve all been pointing to 2011 as the year we break through.  I don’t want to hear anymore excuses or Rah-Rah stuff.  Get it done.  If CRN doesn’t deliver, it’s time for a new HC.  Look at it this way, IF (That’s a big IF when it comes to UCLA) we can get a reputable coach if CRN doesn’t deliver, he’ll have plenty of talent to turn the program around quickly (think Urban Meyer post the Zooker).