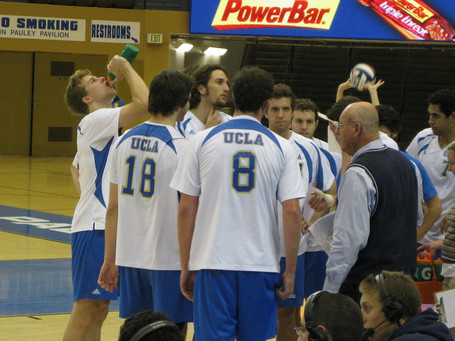 (Coach Al Scates imparts words of wisdom during a timeout at the 1/20 game v. Pepperdine - sorry I don't have any more recent pics of my own)

In the first set, UCLA fell behind due to multiple kills by Gauchos Jeff Menzel and Jake Rosener but kills by senior Garrett Muagututia and sophomore Nick Vogel and a block by Muagututia tied the set at 5. Both teams traded kills and the lead, but attack and service errors by the Gauchos allowed the Bruins to slowly pull away. Sophomore Thomas Amberg, RS sophomores Jack Polales and Jeremy Casebeer, Muagututia and Vogel continued to hammer in kills taking the Bruins to match point 29-25. Two UCSB kills and a Bruin attack error kept the Gauchos alive at 29-27 but after a UCLA timeout and one more UCSB kill by Menzel, the Bruins finally blocked a UCSB attack to take the set, 30-28.

The second set started much like the first, with UCSB's Rosener and Cullen Irons knocking in multiple kills and the Bruins answering with kills by Polales and Casebeer and a block by Amberg and Polales. Seven UCSB errors (not consecutive) allowed the Bruins to take a lead at 11-10. Kills by Muagututia, Polales and Vogel, as well as a service ace by Vogel and a UCSB error gave the Bruins a 16-13 lead. A UCSB timeout calmed them down some but continued errors and Muagututia being on fire with multiple kills and blocks continued to widen the Bruins' lead by as much as 7 points. A UCSB service error gave the set to UCLA, 30-25.

UCSB came back with a vengeance in the third set. The Gauchos jumped to a 3-0 lead and although the Bruins fought back with attacks by Vogel and senior Kevin Ker and a service ace by Ker, they weren't able to close the gap. UCSB continued to commit errors but they had enough of a margin and firepower to stay well ahead of the Bruins. The Bruins recorded multiple kills by RS sophomore Weston Dunlap, RS junior Dylan Bowermaster and sophomore Kyle Caldwell but the Gauchos handily took set three to stay alive in the match, 19-30.

UCLA fought back and Muagututia opened set four with a kill. More Muagututia attacks, blocks by Bowermaster and Dunlap and a service ace by Vogel brought the Bruins ahead to 11-7. This time the Bruins had the benefit of the margin. UCSB hung on with kills by Todd Travis, Sam Moisenco and Scott Slaughter and several UCLA errors but Muagututia led the charge with multiple kills and Dunlap, Polales, Bowermaster, and Amberg contributed with kills of their own. The Bruins also put up several successful blocks, and Kevin Ker recorded another service ace. Muagututia closed out the set and match with one last kill, 30-24.

The win brings the UCLA record to 8-6 overall, 7-4 in the MPSF. Muagututia and Polales both recorded double-digit kills at 18 and 11, respectively. UCSB actually had more total kills at 64 to the Bruins' 53, but I think their 34 attack errors really sunk them (UCLA recorded 24). It looks like the team is really focusing on building up their scores by putting up more blocks and reducing errors. Their attack percentage at 0.228 is not great, but hopefully they'll continue to improve. They've now won 7 of their last 9 matches (coming off of a 4-game losing streak before that), including 4 wins out of the last 5 games on the road.

The Bruins return home on the 19th to host #1 Cal State Northridge, who will be seeking to avenge a Bruins sweep earlier in the season as well as a loss tonight to #11 UC Irvine. First serve is at 7 pm at Pauley. Go Bruins!