CRN, you sir get coffee because coffee is for closers. For the second straight year, CRN is having himself a big signing day. The three most recent guys to sign on for the blue and gold are Owamagbe Odighizuwa (Tele has his video of his announcement here), Josh Shirley and Anthony Jefferson (Thanks Tele for the screenshot): 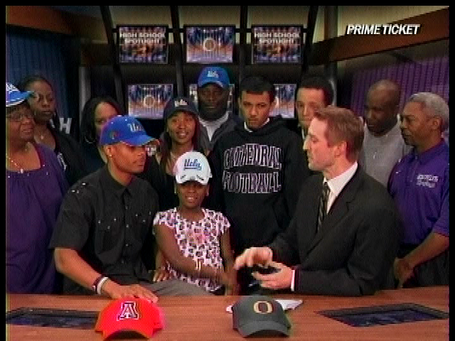 Owa is the #2 defensive end in the country and unbelievably talented. The guy will be an immediate impact end who who terrorize opposing QB's. Jefferson is one of the most underrated players in the country, IMO, and don't forget the two times he shut down Robert Woods. Shirley came out of nowhere to pick the Bruins, teaming with Zumwalt and Kendricks to give the Bruins a very good class linebacker. Now, we've got just one more to keep an eye on.

Can Riley cap off a huge class?

Right now (not taking the Jefferson or Shirley commitments into account yet), the Bruins' recruiting class is up to #10 in the Scout national rankings and #9 in the Rivals team rankings. That's getting it done right there and as A has pointed out so many times, we're doing this coming off of a combined 11 wins in the last two years. I don't think we'll have many years like that in the future. CRN is on FIREEEEEE!

Here's our list of guys who have sent in their Letters of Intent, minus Owa, Shirley and Jefferson, who we're waiting on to officially their LOI faxed in. These are your official UCLA Bruins and hopefully, we'll add to it.

UPDATE (R): Stewart Madel sums it up rather well.

UCLA is just killing right now. Josh Shirley and Anthony Jefferson on the heels of Owa.

UPDATE II (N): DB Anthony Jefferson and DL Owamagbe Odighizuwa have sent in their papers and are part of the Bruin family per UCLA athletics. Welcome to Westwood boys. GO BRUINS.

UPDATE V (N): Riley caps off a perfect NSD by becoming a Bruin (rejecting the Trojies). A perfect day pretty much for Neuheisel's UCLA. GO BRUINS.