UPDATE (N): The tweet below has now been deleted. No explanation yet. Also I would note the overwhelming majority of his previous tweets were all about basketball.

This was posted on Malcolm Lee's twitter just 12 hours ago: 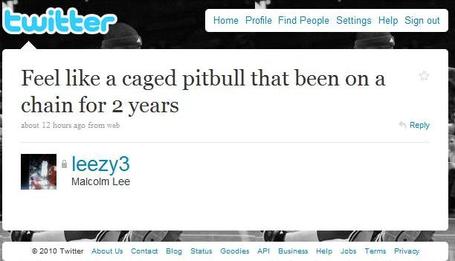 Needless to say this raises a lot of questions about the UCLA basketball program under Ben Howland. What is going on over here? This is not the first time Malcolm Lee has taken a shot against Howland. He basically called out the coaching staff for poor preparation against the Trogans.  We have also seen other issues with lack of communication emerge in this team earlier during this dreadful season.

We were led to believe Drew Gordon was a bad apple (he sure acted like it). However, what explains this statement?

I have said it before and will say it again. The way Howland has managed his rotation this year leads to lot of questions. He has no doubt coddled Nikola Dragovic game after game, who hasn't showed any kind of sincere commitment to play defense, while using the quick hook for all other guys. His handling of Mustafa Abdul-Hamid's minutes hasn't made a lot of sense either since Hamid emerged into the scene.

Now Lee's twitter hints at something possibly deeper within Howland's program. We already heard rumors about the delusional feelings around his camp of pimping him as some kind of pro material. However, his tweet is troubling.  Something is not right and it is going to be interesting to hear what explanation we get for this.