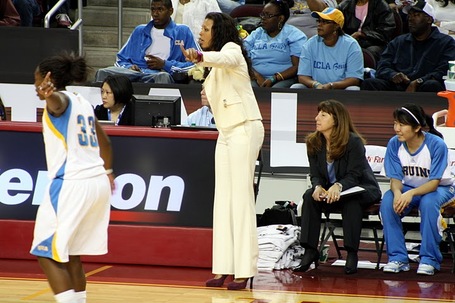 UCLA entered the semi-final of the Pac-10 tournament facing USC, the team that most evenly matches the Bruins.  The game was full of emotion, not just due to it being a rivalry game and for a chance to enter the Pac-10 tournament finals, but because both teams had reasons for wanting revenge from earlier in the season.  UCLA entered the game on a 9 game winning streak, USC on a 6 game winning streak, but someone would have to budge.  There was a surprisingly decent sized crowd tonight.  USC had one section of alumni fans, but seemingly no students on their own home court.  UCLA had 3 good sized sections, and the fans who made it out to the game made a great impression.  Rick Neuheisel was on hand for the game, and even came through the band giving high fives and taking a few photos with us.

When the game started, Erica Tukiainen was not one of our starters, which I believe is the first game all season she did not start.  I believe she was suffering from leg cramps today.  She rode an exercise bike, went into the locker room, and eventually got into the game, but played well below her season average, for only 12 minutes.

UCLA started the game off solidly without the services of Erica, however.  Midway through the first half, UCLA held a 14-10 lead.  USC started to rely on 3 pointers, unable to penetrate UCLA's defense in the paint, and UCLA kept daring USC to shoot, as they were a terrible 3-16 in the first half from behind the arc.  UCLA used a 9-1 runto take a 23-11 lead, their largest of the game on a 3 point shot by Darxia Morris that really shot alot of energy through the Bruin faithful in the stadium.  Down 28-16, USC closed the half on a 8-2 run, capped by a 3 pointer at the buzzer by Heather Oliver to go into halftime down only 30-24.  UCLA outshot USC in the first half 46%-28%.  Darxia Morris lead the Bruins with 9 first half points.

As the teams were heading into the locker rooms, USC's team had to pass by our band.  Michael Cooper was delayed behind his team, most likely due to being interviewed before he could leave with the team.  As he passed by the band, a loud chorus of boos rained down on him.  He stopped, and with his slimy grin, cupped his hand to his ear taunting us just as he had at Pauley.  And we all know how that ended up for him.

At halftime, Neuheisel went to the locker room to give the team a motivational pep talk. Jasmine Dixon was quoted by ESPN as saying "He was just enthusiastic about us having a lead on SC and basically told us to keep it up, don't let off the gas ...  I was surprised because he is a big-time football coach ... We knew we had to get it done"  While i didn't see the game on tv since I was there, apparently Nikki's halftime speech included the great line "If someone tries to stand in your way, you stand with those four letters across your chest and you need to be pumping it".

USC came out of the half with a 10-4 run to tie the game at 34-34.  From that point on it was a tough fight.  USC kept tieing the game or have a one point deficit, but UCLA continued to hold USC at just an arms length away.   Thanks to improved 3 point shooting (5-11) in the second half, UCLA could never put USC away, and USC finally took their first lead since the early goings 50-49 with 5:51 remaining.  While USC got their 3 point shooting going, UCLA was playing aggressive, getting to the line, and burying USC with freethrows.  USC shot 4 freethrows in the second half to 19 to UCLA, but we missed many opportunities, making only 11-19.

A 3 pointer by Heather Oliver gave USC a 53-51 lead with 4:33 remaining, but that would be the last time USC would score. Markel Walker got fouled with 4 minutes left, and made 1 freethrow to cut the lead to 53-52. In a maddening sequence, Darxia Morris was fouled on a 3 point attempt with just under 3 minutes remaining, but missed all 3 attempts to remain down 53-52.  Darxia then stole the ball under our own basket and was fouled going up.  She missed the first free throw, but hit the second to tie the game at 53 with 2:31 remaining.  In her defense, i think she played the entire 2nd half, and it was clear that she was very tired, but the team needed her out there as she is a very clutch shooter in crunch time.  UCLA regained the lead with a layup by Markel Walker with 1:40 remaining.  UCLA played lock down defense the rest of the way, and Doreena Campbell hit 4 freethrows in the last 20 seconds to ice the game.  Game photos presented by AK4787

UCLA had 3 scorers today in double digits.  Darxia Morris stepped up today in a big way with 16 points on 6-7 shooting (1-1 from 3) and had 4 steals.  Markel Walker had 15 points and 8 rebounds, and Jasmine Dixon recorded a double double with 10 points and 12 rebounds.  Todays game really was all about the starters, as all but 3 points came from the starters today.  In a game where they had to play major minutes in a very emotional, tough victory, you hope they still have something left in the tank for tomorrows game.  UCLA did a good job taking care of the ball with only 14 turnovers, outrebounded USC 40-33, and outshot USC 43%-32%.  Funny that the last time we played at the Galen center vs SC, freethrows were their key to victory against us, but today they were just 7-11 while UCLA was 17-28.

With the victory today, UCLA improves to 24-7 on the season and advances to the championship game of the Pac-10 Tournament to face a Stanford team that has still yet to lose a game to a team not named UCONN.  UCLA will need a nearly perfect 40 minutes of intense effort if we are to defeat Stanford, but last time they faced us in LA, they won by just 4 when they average 25 point margin of victory per game.  Either way, with the win today, UCLA has probably all but locked up at least a 6 seed for the NCAA tournament, with a 5 seed not being out of the realm of possibilities.  The championship game will be at 3pm tomorrow, and televised on FSN.