While "trOJans" is still my favorite way to refer to the cheaters across town, U$C* football recruit Markeith Ambles has provided us with a great new way to poke fun at the Trogans (especially while doing it verbally).  Being ignorant Trogans, they are quick to excuse Ambles' mistake as a simple typo anyone could easily make.  Truth is, though, that he's used "Trogan" in two different tweets on different days. As expected, his Twitter account has been shut down and is no longer available.

The best evidence I could find of the two separate tweets is this Atlanta Journal-Constitution article that quotes his Twitter feed:

SI.com recruiting reporter (and former AJC intern) Andy Staples was first to note Ambles’ problems with spelling "Trojans" when he saw Ambles’ tweet: "@mARKEITHAMBLES: who will i be tomorrow a vol, trogan, or tar heel!!!!!!"

Staples blew it off as a typo until he saw the Henry County wide receiver’s update on Twitter after committing to USC Wednesday morning. At 12:19 p.m. he tweeted: "Go Trogans!!!!!!"

Wanting screen captures that we could preserve for posterity, I asked for help in this thread.  Thank you Bruins, I think we have enough evidence--even for those Trogans who seem to be in eternal denial.

HT to Patroclus for the LINK to SI:

Tuesday, Ambles tweeted this: "@mARKEITHAMBLES: who will i be tomorrow a vol, trogan, or tar heel!!!!!!"

I chalked that one up to tiny mobile phone keys or touchscreen issues. After all, the G and the J are separated only by the H on a standard QWERTY keyboard. But when Ambles tweeted Wednesday about his decision, I began having doubts. At 12:13 p.m. Wednesday, he tweeted this: "@mARKEITHAMBLES: Go Trogans!!!!!!"

Thanks to Google's cache, we have a screen cap of his first tweet: 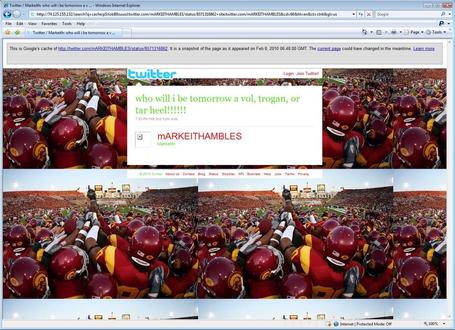 If that weren't enough, Ambles provides this example of class to make sure Lame knows exactly what "type of guy" he is.

Ambles, a five-star wide receiver who decommitted from the Vols last month after Lane Kiffin’s sudden departure, was riding up to Knoxville from Atlanta on Saturday afternoon with linebackers coach Lance Thompson and recruiting intern Steve Rubio when he posted this tweet:

"@AnimalHeather ridin up to k-town wit coach t and rubio and whenever I got there me and u need to go bone to bone pretty girl." (Nobody’s been able to identify exactly what "bone to bone" means, but it certainly kindles the imagination.)

Harrington, a 25-year-old ex-Lady Vol volleyball player and one of the hosts of Doc, Jeff, and Heather in the Morning on WNML 990 AM, replied the following day: "Really? I am not a vol hostess and I don’t hang with recruits."

Well, it sure seems like he's going to fit in just fine at that SCandalous program across town.  Maybe he learned his respect for women from this guy: