"We had some numbers here that I don't know if they are deserved," Kiffin said. "No. 1 should be a dominant player."

Kiffin mentioned that former wide receiver Mike Williams wore No. 1. It was also worn by Keyshawn Johnson but Kiffin did not name him.

None of that mattered to an upset Bryant.

"I just came in (to the locker room) and saw my jersey taken away," Bryant said. "No one said anything to me. I need to talk to (Kiffin) about it."

Informed that Kiffin cited Williams as the prime No. 1,Bryant said, "What about him? What's that have to do with it?"

Kiffin also removed No. 43 from walk-on linebacker Will Andrew. That number was worn by former safety Troy Polamalu.

"We need a guy to show up and deserve it," Kiffin said.

Really? Hello Kiffin is lecturing Trogans about "deserving" things. This is like Nikola Dragovic showing up at basketball practices and barking at others for not playing defense. Oh and Meshawn Johnson wearing number 1 my memory is a little different: 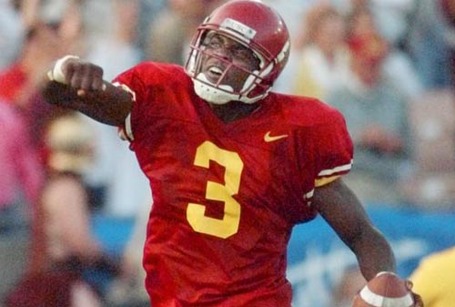 Did he ever wear number 1? I can't remember. Then again Trogans might have problem with counting.

Anyway, what is going on here is that Marqueth Ambles probably demanded to Kitten that he gets number 1. So Lame decided to take it away from a da*n good receiver like Flournoy. Good times.