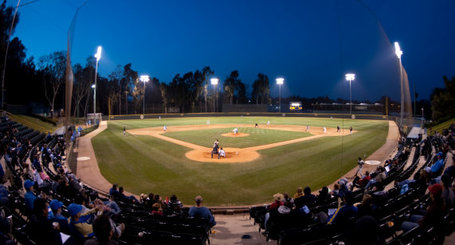 Is it time for a complete overhaul of Jackie Robinson Stadium? After tonight, you'd think so (Photo Credit: Official Site)

In case anyone was curious whether or not the Bruin fans in Southern California were taking notice of the hot start the UCLA baseball team was on, they got their answer on Friday night. Three days after over 700 fans showed up to see UCLA defeat Pepperdine to make up one of the largest midweek crowds in years, nearly 1,500 showed up on Friday night to see the Bruins play Stanford. Unfortunately, Jackie Robinson Stadium was not equipped to handle a crowd of that size.

Jackie Robinson Stadium has roughly 1,000 chairback seats. All of them were packed. A couple hundred more sat on the grass hills above the dugouts. People ran out of room on the hills and were forced to stand, only some people had small children and could not stand for the entire game so they left after seeing there was nowhere for them to sit. Others just had no interest in standing for the duration so they too left.

In addition to a shortage in seating, the facilities could not handle the capacity crowd. The concession line was all the way down the concourse and was near the stairs that act as the entrance to the stadium. The restroom lines were out the door as well and they were fully staffed making use of all the facilities at their disposal. The facilities just are not built to handle a capacity crowd.

The athletic department and Coach Savage have made it clear that they want to expand the capacity of Jackie Robinson Stadium by putting seats where the grass hills currently are. The idea is to increase capacity, but how do you expand capacity when the concessions and restrooms can't handle the current capacity?

Coach Savage has stated that after an expanded capacity, a new clubhouse is atop his priority list for Jackie Robinson Stadium improvements and that the press box is also in need of a renovation. If the capacity needs to be expanded and the press box, restrooms, concession and clubhouse all need to be renovated or rebuilt, why can't it be done all at once so as to best support the program and make it a quality facility?

Friday night's game versus Stanford proved yet again that the fans are not properly served by the stadium as is, we know that Coach Savage believes the clubhouse does not best serve the program as is and to host in the postseason, it requires a ton of temporary work to still lose money. It's time for a complete overhaul so the program and its fans have a facility to be proud of and one fitting of the Jackie Robinson name.