UPDATE (N): Let's turn this into an all out celebration/congratulatory thread now that ATV is in the NFL. Tennessee Titans just picked up ATV (what's even more poetic they dumped a Trogan - LenDale White - to make it happen). ATV is going to be at home in Bruin blue in Tennessee. Here is the official release which notes ATV becomes the second Bruin DB to go in the NFL draft since Matt Ware went in 3rd (number 89 to the Iggles). I just have this feeling that we are going to get used to posts like this in the coming years. It's a great feeling: 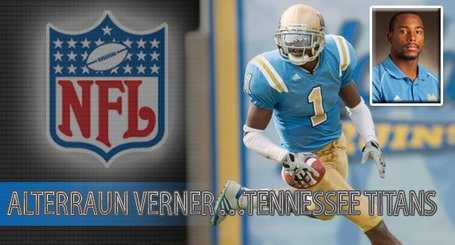 Congrats ATV. Also please recommend this thread up so we can have congratulations coming in all week celebrating two legendary Bruins. GO BRUINS.

A quick fanshot on this good news is already up but this one requires celebration and congratulation from the entire Bruin Nation. Brian Price is headed to Fox71's neighborhood: 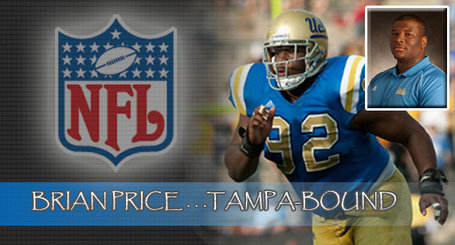 Brian didn't get on board on opening night. However, he didn't last long on the second day as he became 3rd pick of the second round (38th overall) headed to Tampa Bay Buccaneers.

From the official release:

"The Buccaneers have themselves one of the great steals of the draft," said UCLA head coach Rick Neuheisel. "Brian has the talent and the drive to be an outstanding performer on Sundays. In addition, he is a great young man from a great family. The Bruin family is excited to watch him excel at the next level."

In addition, he was the co-defensive winner of UCLA's Henry R. "Red" Sanders Award for Most Valuable Player. He was voted first-team All-Pac-10 by the league's coaches in 2008.

Price finished his Bruin career ranked second on the UCLA single-season tackles for loss list (23.5) and is No. 1 among defensive tackles. He also ranks second in school history with 44.5 career tackles for loss.

I will reiterated what wrote during the Draft thread last night. While we were a little bummed that Price didn't get to go in the first round, it will work out just right for Brian. Getting disrespected by not getting picked in the first round is nothing compare to the adversity he fought through on his way to the NFL.

Looking forward to watch Brian make other NFL teams pay in a long and productive career. Congratulations to Brian and I hope all members of this community offer up their best wishes to one of the best players ever to put on a Bruin uniform right here in this thread. Let's also keep our fingers crossed for ATV and other Bruins pursuing their pro careers.

Going back to Brian, fire away with his congrats in this thread. We will make sure he sees it and knows we are all going to be rooting for him rest of the way.