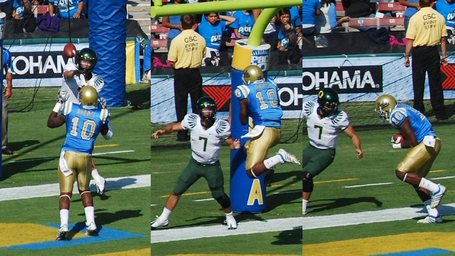 We have a bunch of football notes to share this Friday before Ryan and co. gets the baseball party going at BN. Let's start with Akeem Ayers, who was put on the Lombardi watch list Thursday. This wasn't a surprise because Ayers will probably find himself on all kinds of awards watch list and All American lists heading into this season. In addition to his solid play (second on the team in both sacks (6.0) and tackles for loss (14.5)) it was his freakish Sports Center highlight plays (3 TDs) that has him on everyone's radar this off-season.

The key for Ayers will be to block all of this attention and stay focused this off-season. Ayers really came along towards the second half of the season when Chuck Bullough started using him in a hybrid DE/LB role (essentially turning UCLA into a 3-4 defense) lining him up all over the field. Hopefully that trend will continue (without making our defense too predictable) from the very first game in 2010 season.

Maybe it's because Prince didn't waste much time assuming control of the team after it returned from its EagleBank Bowl victory in December. He organized a weekly throwing schedule with his receivers three or four times a week at Spaulding Field.

"It's all about getting that timing down," receiver Taylor Embree said. "You look at the NFL and the greatest quarterbacks -- Peyton Manning and Tom Brady -- it's all timing. This is a rhythm game. Once you get that trust and that rhythm down, there's no stopping it -- especially with someone as skilled as Prince."

"Coach Chow wants us to take control," Prince said. "He wants us to push him to the side and say, 'We've got this.'"

Hope Prince continues to exercise that kind of leadership through rest of this off-season. More after the jump.

Now that the good news is out of the way here is the news of setback from Randall Caroll and Sheldon Price. From the track team notes:

Sprinters Randall Carroll and Sheldon Price are academically ineligible for the spring quarter. They will not compete in any meets during this quarter.

This also means Carroll and Price are not going to be elgibile to participate in this weekend's track meet against Southern Cal. The news doesn't surprise me all that much though. Again both of those kids are freshmen. The workload pressure on a UCLA freshmen who is trying to balance football practice, track meets and most likely 12-16 units of courses are a little ridiculous. I have seen lot of class valedictorians struggle over the years in their first year in Westwood with full workload of classes, work and extra-curricular activities. So I am not surprised this happening to Carroll and Price.

I kind of wish they weren't doing track in their first year and waited till their second or third year to get acclimated to the rhythm of UCLA's quarter system. Let's hope those guys take care of business this quarter to get ready for Fall. Suffice to say they are not going find someone like Senora Ross in Westwood.

Speaking of Senora Ross, let's end with a link to a dumb column by Dennis Dodd from CBSSportsline.com. Dodd wrote up a silly article comparing Hello Kiffin and Rick Neuheisel. He tries to make the argument that Kiffin is the same "coach" Rick Neuheisel was when he took over Bill McCartney's program in Colorado.  Dodd just happened to leave out a very important fact while making the comparison.  Neuheisel actually won on his own in Colorado and in Washington putting together seasons featuring double digit victories and accumulating a .688 career winning percentage before taking over at Westwood. Kiffin in comparison still hasn't cracked the .400 mark.  So whatever.

Kiffin and his PR chronies at Southern Cal are on a full campaign mode to paint him as some kind of tough guy who is out to impose discipline lost during the Pom Pom era. LOL. They can put as much lipstick on their pig as they want but are not going to be able to get away from superficial and sleazy track record compiled by who by all account is the Paris Hilton of college football.