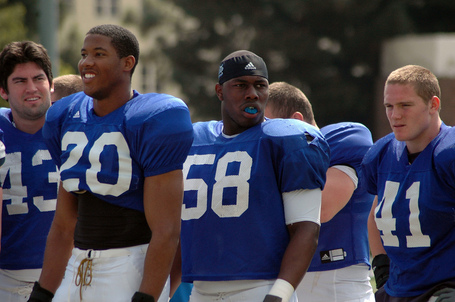 Meant to post this sooner but ran into technical difficulties.  It was a gorgeous day with a surprisingly good crowd on hand at Spaulding.  However, a bit of somber news which others have already posted regarding Brandon Sermons.  I didn't see what happened but I could tell his injury was serious since he never got back up.  Hoping for a speedy recovery for Sermons.

JDub, Petros (yes he is a sucster but he's alright in my book considering he is objective in his assessments of Bush and Leinert) and Dietrich were in attendance.  A handful of recruits were there but I couldn't tell who was who.  Chatted with a guy who said that Jalen Grimble (cousin of Xavier Grimble) and Junior Pomee were at practice on Friday.

Take my observations with a grain of salt considering I'm an Armchair QB and we've only been through 3 practices thus far.  Was able to take a few photos but I'm still having technical difficulties.

Overall, the team came out with a lot of energy.  Rahim and Kia were both whooping it up getting the team fired up.  The team seemed to be excited putting on the pads which resulted in some physical collisions.  I'm going to try and make it out there a few more times and I'll try to observe as much as possible.