Share All sharing options for: UCLA Decides To Stick With Three Stripes But Details For The New Adidas Deal Are Unclear

The Daily Bruin teased the scoop last night via it twitter account. Sam Allen's story on UCLA reaching an agreement with Adidas is now up on their site:

The university and shoe company reached an agreement in principle to renew their sponsorship late Thursday night, just 24 hours before their exclusive renegotiation period was set to end, according to Glenn Toth, UCLA senior associate athletic director. The deal will preserve a long-standing relationship between UCLA and adidas that first began in 1999.

Toth said that no formal letter of intent has been signed yet, but that UCLA Athletic Director Dan Guerrero was planning to meet with adidas executives this weekend at the Final Four in Indianapolis. Once the letter of intent is signed, work on the actual contract will begin.

Toth was not certain when the contract would be officially completed, and he did not comment on any of the dollar figures of the new deal. Attempts to reach executives at adidas were unsuccessful; the company has refused to comment throughout the renegotiation process.

Toth said this new deal would resemble the structure of the current one and include many of the same elements and provisions. Under the current deal, adidas pays UCLA $2.5 million in cash and provides $1.6 million in equipment each year. The current deal also includes an allotment for UCLA Recreation. It was set to expire in June 2011, and UCLA athletics needed to have a new deal in place by the end of this summer so that it could place orders for the 2011-2012 athletic seasons.

Of course this is a topic that has generated lot of intense discussion on BN. In a poll taken last September (in which more than 1,000 BNers voted) 66 percent of this community wanted UCLA to sign with another equipment/apparel/footwear company (with plurality voting with Nike at 41%). Only 32 % wanted to stick with Adidas.

I personally have always preferred Adidas. I also like the fact that signing this deal allows UCLA to stand out from rest of the Pac-10 where all the other teams are signed with Nike. However, there have been some noticeable issues with UCLA's current relationship with Adidas.More on that after the jump.

First of all the company has done a terrible job of promoting UCLA's brand. They haven't promoted the UCLA brand the way we thought they would when UCLA entered into the relationship in 1999 (when our football team was riding high). Sure our football program has struggled since then, but our basketball program created plenty of marketing opportunities in recent years and we never saw Adidas play them up in an effective manner.

Second, UCLA football program specially has had equipment issues with Adidas. It was very noticeable during the Eagle Bank Bowl in DC, when our team got caught flatfooted early in the first half because of equipment issues on the frozen turf (while Temple players were doing just fine).

It will also be interesting to hear the amount of the K. UCLA's previous K with Adidas paid the university $2.5 million in cash and provides $1.6 million in equipment each year. Yet under the K Adidas signed with Michigan in 2007, in addition to an average annual payout of $6.85 million (in cash and equipment), adidas agreed to pay a $6.5 million signing bonus to Wolverines.Looking just at the practice jerseys in Ann Arbor, to me it seem like Adidas is finding a way to come up with sharper looking product for the Wolverines: 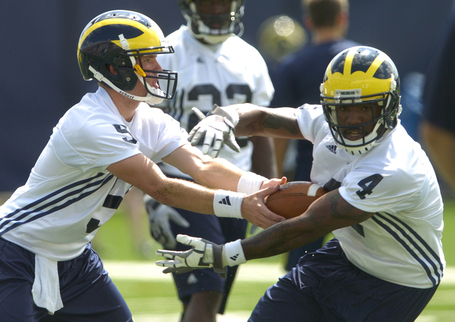 And for the Volunteers: 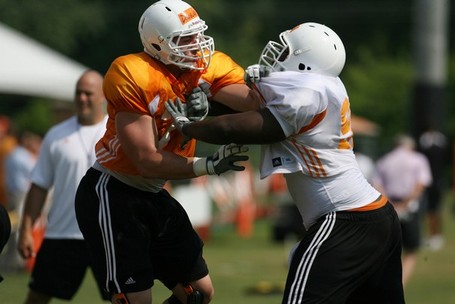 Where are the stripes in our practice jerseys or about a little subtle variation to switch up between plain white shirts and striped ones?

So, I would hope there is more than a noticeable uptick in the financial agreement UCLA is entering into with Adidas under the new K. So, it would be good to hear what kind of deal UCLA officials were able to renegotiate with Adidas and whether they did their due diligence in sincerely looking into other viable options.

If the same issues identified above continue to persist under a new agreement that would really serve our athletic program short. Considering the overwhelming public feedback that has poured in on this topic in recent months, UCLA officials will have only themselves to blame, if Adidas doesn't make a concerted effort to address the issues raised by the Bruin community in recent months.