So I left town yesterday to spend couple of days for few meetings in my old neck of the woods. Naturally it made sense to take in a little slice of heaven and check in on these guys: 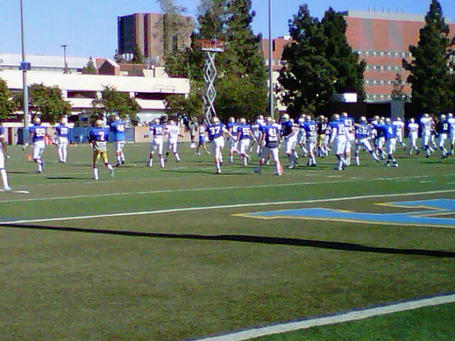 Apologize for the quality of these shots because they are just not the same as the amazing pictures often shared here by BNers and other Bruin fans who take serious cameras to take in the action. I am lame as I completely forgot to pack my camera.

I should have remembered it because well this was my first spring practice in almost 15 years when some freshman named Cade McNown was getting acclimated to being the entrenched starting QB under a new head coach. Oh well. I tried to grab couple of shots through my blackberry because it was pretty exciting to come back to what felt like home.

In terms of the settings, not much has really changed. The biggest difference I saw were the trees lined along Pauley Pavilion are gone ("Phase 1" of renovation? (j/k)). Also, the ginoromous Ronald Regan Hospital Building really stand out from Spaulding (which of course wasn't around when we were students). Still watching and taking in the practice was a lot of fun on a beautiful and just perfect Westwood afternoon.

I met up with Achilles and Ryan right on campus. Menelaus and Sideout11 then came out and joined us for pretty interesting afternoon of action (well it was interesting to someone like yours truly who doesn't get to take in these practices on a regular basis) out at Spaulding Field.

Guess we were lucky because the team did some live scrimmage for about 25-30 plays to close out the practice session. As always I am always reluctant to form any kind of general impressions leading to expectations heading into Fall during these practices. Nevertheless there were few notes from the day that I think are worth sharing. Let's get to them after the jump.

Bullets on what I saw yesterday afternoon:

So those are my notes. Over all I really enjoyed the energy and excitement from practices. I actually thought I'd be kind of bored pretty fast watching it. It seemed clear though that the guys were going at it pretty hard and competing pretty fiercely to make plays. Again you should take them with a grain of salt considering I haven't see any of other practices. Incredibly difficult to project how our depth chart is going to shape up or foresee how these reps will turn into rotation this Fall. But hey it gives us something to talk about.  Of course if you were there yesterday and want to offer up your thoughts, please fire away.

More importantly though, it was just fun to be out in Westwood and take in Bruin football from Spaulding Field. It is always good to come home. Every time I come back to UCLA I keep wondering the same question: why a D-1 athlete with scholarships offers would even consider going somewhere else? Just like it has always been it was another beautiful and perfect day in Westwood. As I said a little slice of heaven.

I am on my way back to DC today. So will I will see you from other coast later tonight or tomorrow.