So it's on. UCLA officially broke ground to began renovation for Pauley Pavilion this afternoon. The official site just released the following video with highlights of the ceremony. You are getting one of the first look at it as the time I am embedding it in this post it has "0" views:

Here is the release from our official site with the following comments from Chancellor Block:

"The next chapter in the illustrious history of Pauley Pavilion begins today," said Chancellor Block. "If the building's walls could talk they would tell the stories of thousands of students who over the last 45 years have gathered here during key moments in their UCLA experience - from freshman welcome and graduation, to intramural sports, Spring Sing and Bruin basketball, volleyball and gymnastics events. This project ensures that the legacy of Pauley Pavilion will live on in the 21st Century."

"We are extremely grateful for the groundswell of support from more than 600 donors who have rallied around this legendary arena," said Guerrero. "Their gifts and pledges of more than $65 million have enabled us to begin construction and make the dream of a revitalized Pauley Pavilion a reality. But we have not yet reached our goal and invite Bruins everywhere to participate in the Campaign of Champions."

You can read rest of the release here. I will post some more pictures and links to photo gallery after the jump.

Per the official site there were "hundreds of excited students, faculty, alumni and Bruin supporters gathered to witness the milestone event." Here is how they looked: 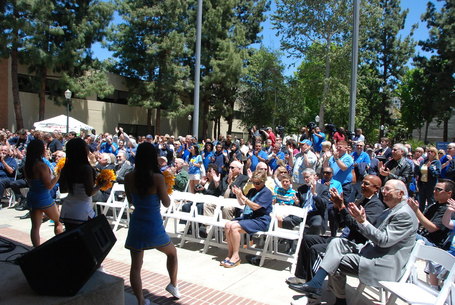 They cheered on as Block, Guerrero, Vice Chancellor of Student Affairs Janina Montero, student-athlete Anna Li, and Matt Pauley, grandson of Edwin Pauley, picked up blue and gold shovels to turn over a patch of ground on the east side of Pauley Pavilion: 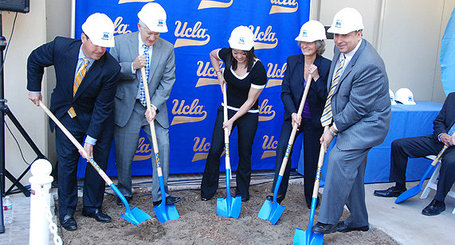 Coach Ben Howland was there and at least by this picture he looked to be in great mood: 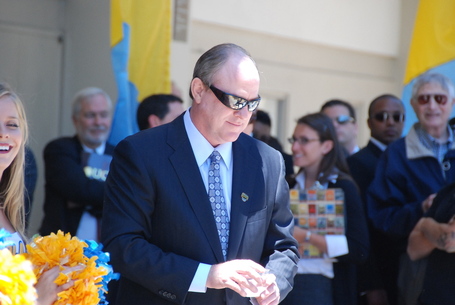 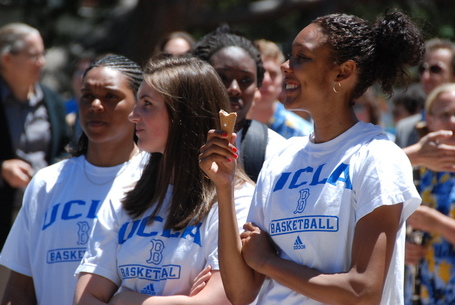 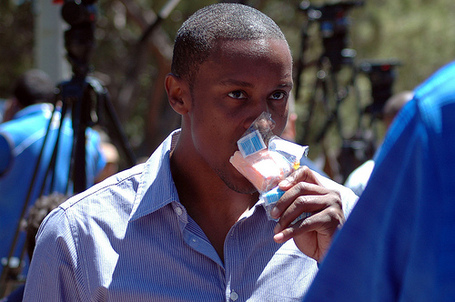 Hmm. I am detecting a theme around ice cream.

Going back to the official release here are some of the highlights of the renovated Pauley Pavilion:

I hope we can get this done in time and get it ready for the start of 2011-12 season. BTW the recruiting class of 2012 headlined by recruits such as Shabbaz Muhammad is a very talented one. If the Bruins get back on track next season and build on it during their Southern California road show during 11-12 season (when they will play most of their games at the GW Forum with few sprinkled in around Staples Center, the OC and perhaps even the Inland Empire), Coach Howland will have a lot to sell with potential recruits who would want to break in one of the classic Cathedrals of college basketball.

Anyway, to check out the official photo gallery from today's event go over here. bruin805 was gracious enough to share some of his photos here. I know I criticized the official site for their photo gallery but props to them for firing off the video to us and sharing with us extra photos from the gallery. Give them points for effort.

If you were at the event, it would be great if you would consider blogging about it or sharing your photos etc in our fanposts section.

UPDATE (N): Here is an extended video of the ceremony:


Its about 25 minutes long but worth watching for those of us living outside LA. GO BRUINS.