Bumped. One of the more powerful posts we have read in this community over the years. GO BRUINS. -N 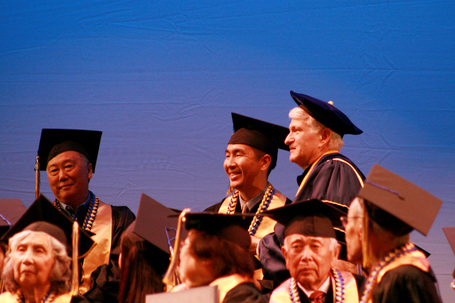 Today we attended UCLA Alumni Day, including a terrific "Celebrating a Century of Coach Wooden", which I'll write about it if no one else does.  But something far more important happened today, which we want to share with Bruins Nation.

This morning, at a very special ceremony, my late father-in-law and 73 other Japanese American Bruins received honorary degrees.  They had all been attending UCLA in 1942 when President Roosevelt issued Executive Order 9066 requiring US citizens of Japanese ancestry to be sent to internment camps.  Many of them were in fact interned, and others, like Dad, fled the state.  (His sister did go to Manzanar, where she and her new husband, a UCLA grad, were forced to start their married life.)  Because Dad was subsequently drafted into the US Army and served during the Korean War, then married and had a family, he never was able to resume his studies.  But ever afterwards he always took a great interest in our school, and he was extremely proud when his daughter became the first of his family to graduate from college (UCLA'74).  When I later met and married her, he and I spent many wonderful hours watching the games on TV or talking about all things Bruin.

The ceremony today was as moving as it was significant.  Tritia Toyota, former Bruin cheerleader, famed LA newscaster, and now PhD professor at our alma mater, was the mistress of ceremonies.  She summarized the wrongful history, the efforts of many people to right a longstanding injustice, and at the end pulled out a camera to capture one of the honorees, her uncle.  Chancellor Block gave a heartfelt address about the contributions the students had made on campus and after wards; it was particularly chilling to learn that three Bruins lost their lives during World War II, fighting to protect the very country that had treated them so unfairly.  (They were in the famous 442nd, the most decorated unit in American military history, which also included my wife's uncle.)

One of the honorees spoke at length of his time at UCLA and his life afterwards.  He became the head of our nation's National Reconnaissance Office, the top-secret spy agency.  His boss said to him, "You've gone from not being trusted to being one of the most trusted persons in the country."  Neither he nor any of the others who spoke, or whose stories were recounted, exhibited bitterness, nor did they turn their backs on the country that had turned its back to them.  All left a legacy of hard work, common sense, loyalty, great decency, and family and community spirit. Sadly, most of the students are no longer alive.

Dad always was a true Bruin, and now he has his well-deserved UCLA diploma.  Congratulations, Dad! 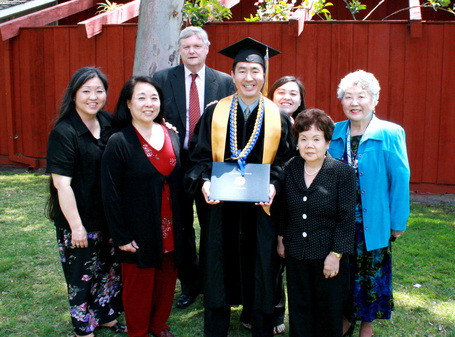 We miss you and hope you had a good seat today.