Lots bits and pieces of football related notes to pass on today. Let's get right to it. Rahim Moore and Kai Forbath find themselves in another pre-season All American list. This time Akeem Ayers (and few other Bruins) joined the party in Phill Steele's college football preview:

Three members of the 2010 UCLA football team have been named first-team All-Americans by Phil Steele's College Football Preview. In addition, 10 Bruins were named to the magazines various All-Pac-10 teams.

Forbath, a consensus All-American a year ago, won the 2009 Lou Groza Award as the nation's top place kicker and led the country in field goals per game (2.15). Moore, who earned several All-America honors, led the nation with 10 interceptions, one shy of the UCLA record and the most in the Football Bowl Subdivision since 2003. Ayers scored three defensive touchdowns - two on interceptions and one on a fumble recovery - including the go-ahead score in UCLA's 30-21 win over Temple in the EagleBank Bowl.

UCLA and North Carolina were the only schools to place three players on the first team while Alabama, Georgia, Nebraska and Oklahoma had two each.

As mentioned above this is the third such pre-season honors for Rahim Moore and Kai Forbath. They were also listed as pre-season All American by Lindy's Football Preview and NationalChamps.net.

Obviously none of this list stuff is going to matter all that much if they don't build on their performances from last season. Still the Bruins are going to have formidable challenge next season given their brutal schedule and the questions they will have to answer due to departures at some key positions during the off-season. More on that after the jump.

[I]ntangibles such as hope, commitment and confidence all seem to be high given UCLA's three-game improvement from last year and a large contingent of returning players. Last year's season cultivated a healthy amount of self-belief but not to the point of arrogance. This team still knows it is the little brother to USC; only now UCLA can make a case that it belongs on the same field.

What remains to be seen is how urgent UCLA is to be great. Neuheisel and offensive coordinator Norm Chow are nowhere near the hot seat, yet they both know the onus is ultimately on them whether UCLA wins more games.

If 2009 is any indication, the schedule will do the Bruins no favors. You can't pick a single road game (Kansas State, Texas, Cal, Oregon, Washington, Arizona State) and guarantee a Bruins victory. They might win three of those but I wouldn't be surprised if they won one.

The home slate is better, but not comfortable, especially not if the Pac-10 is anything like it was last year when a record six teams won at least eight games. Washington State is the only gimme, while meetings with Stanford, Houston, Arizona and Oregon State are too early to call. UCLA always has a chance against USC at the Rose Bowl (cough ... "13-9″ ... cough), maybe even more so in Lane Kiffin's first year.

A year ago I said UCLA would go 6-6 and make a bowl game. (Sorry, but I had to remind y'all.) This year's best/worst-case scenario ranges from 4-8 to 8-4. Primarily because of the schedule (which, I'll admit, is a huge unknown in May), I'm saying UCLA goes 5-7.

Yet I still expect the Bruins to be better than they were in 2009, if that makes sense.

Note the gratuitous "little brother" reference.  I have no idea where he got the sense that guys like Moore, Ayers, Carter, Jones, Bacca, Rosario, and Price think of themselves as "little brothers."  Maya just can't help himself as a classless Trogan.

Still the parameter he set up for UCLA next season might not be that far off. I don't think the Bruins are going to have a losing season but the range I would set for UCLA football for this coming season would be somewhere in the middle of 5-7 and 9-3 seasons. I also think the realistic expectations around this program will set it up rather well for having a productive finish like this past season. The key for us will be the health of our starting QB and the big guys down in the trenches.

Speaking of big guys in the trenches according to Bruce Feldman of tWWL Nate Chandler was one of the top-10 national "heroes" of this spring:

Chandler: "... the 6-5, 290-pounder looked very comfortable after having bounced from tight end and offensive line to now defense."

Fingers crossed for Nate. After all he has been through he deserves to have a great season. Sticking with ESPN, Ted Miller lists "A-List" position battles at UCLA involving MLB and WLB:

A quick review of the Bruins' depth chart reveals few areas without a fairly clear post-spring pecking order, but both these linebacker spots are wide open. Sloan started nine games as a redshirt freshman, so he has more experience, but Larimore is a hard-hitter who played well this spring. Love had 27 tackles last year as a backup safety in 2009 before being moved up. He has the frame and athleticism to beat out the undersized Westgate, but he's still learning the position. Westgate had 18 tackles and started once last fall. If things don't shake out like the Bruins' coaches want them to, then expect at least one of the three incoming freshmen linebackers to press for playing time. And if touted recruit Anthony Barr isn't the answer at running back, might his athleticism be intriguing on defense?

Nothing in there we already didn't know. Still it is going to be fun to see how these battles shape up this summer when Taniela Maka and other freshman check in. I would say Maka was the most glaring omission from that capsule. Miller should learn a little more about him.

Lastly, I will end with a small note on recruiting. Crenshaw star DeAnthony Thomas "committed" to Southern Cal "on Facebook." Good for him. If there are any UCLA fans who are ignorant and uninformed about how UCLA's recruiting has shaped up in last three years under CRN and want to panic over no commitments at this point, then he or she might want to revisit this Dohn concern trolling from last June about UCLA being "the only team in the Pac-10 without a non-binding oral commitment, while conference leader Stanford has 15." Aaah ... we all know how that worked out. 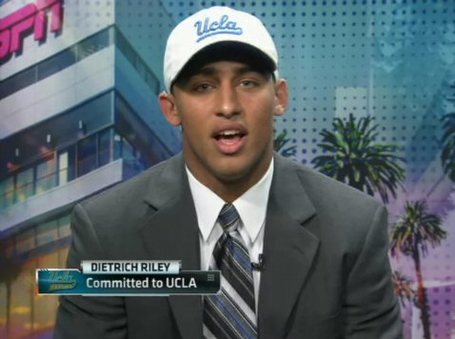