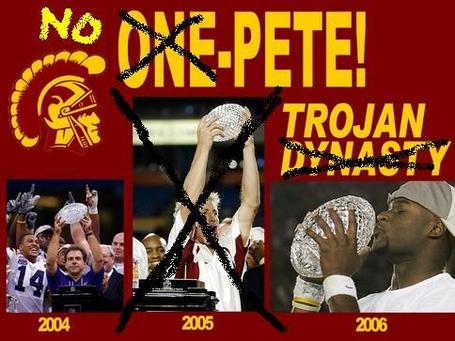 Looks like we are not going have to use the word "alleged" any longer.  As expected leaks of NCAA sanctions on Southern Cal came out via the beat writers in the LA Times and the Daily News. First, here is the LA Times (emphasis added throughout):

A two-year bowl ban and a loss of more than 20 football scholarships are among the sanctions that the NCAA has dealt USC, a source with knowledge of the situation said Wednesday.

The NCAA, the governing body for collegiate sports, informed USC of its decision after a four-year investigation regarding allegations centered on former football player Reggie Bush and former basketball player O.J. Mayo. The NCAA could make its decision public as early as today. [...]

Limited recruiting contacts, probation and forfeiture of victories are also among the penalties regarded as possibly in play.

USC sources, who requested anonymity because they are not authorized to speak about the situation publicly, said they were bracing for the worst. One said the school probably would utilize an appeal process.

Asked if the sanctions were appropriate, a source said, "It depends how you look at it. It is if you're a UCLA fan."

Awww. So so so bitter. If the Trogans are forced to forfeit victories (not vacate), that will mean Bush's stats will be wiped off the record books. It could also very well mean losing their only "legit" championship and their wins against us, including the one at the Rose Bow when the SPTRs took away the Havner fumble recovery. It does not make me forget those losses and Karl Dorrell's utter incompetence in that 19-66 debacle but still it does stain all those "accomplishments." Of course it should also force the Heisman folks to go back and figure out a way to give the trophy to the player who really earned it: Vince Young from our soon to be Pac-10 brethren Texas Long Horns.

The Daily News has more on the Trogans not taking this news too well:

"We got killed," said the source who saw the report but wished to not be identified. "There's no way we won't appeal this decision. One year would be hard to take, but two years?"

A source close to the situation said USC coach Lane Kiffin was livid with the decision, which could cripple his program from a recruiting perspective. USC has received seven commitments from the Class of 2011 in football, but none are binding.

Perhaps Kiffin is a little more afraid than livid. After all he will have to answer to recruits like Dillon Baxter. Remember this from way back in January?

I talked to him (Lane Kiffin) yesterday. He said all the right things. I mean, all about the Reggie Bush thing and what not I am not sure what is going to go on ...

All I was told that worst that could have happen is stuff that I mean ... what happened with Reggie Bush is ... take some losses away ...but other than nothing could affect me or any of my team-mates in future.

I am sure Baxter is not the only Trogan recruit, who are saying hmmmm. Hello Kiffin should be more worried about what now looks to be is lying, conniving and selling snake oil to recruits rather than leaking news about getting "livid" at the NCAA. Hey, we are just getting started here. More after the jump.

As far as the preliminary report on sanctions are concerned, I am not convinced they are stringent enough against the most corrupt and shadiest program in the modern history of college athletics. As they say the devil is in the details.

The two year bowl ban if true is important. CFN.com's Matt Zemek laid out the significance of a 2 year bowl ban:

Two years, though, represents another level of book-throwing on the part of the NCAA. This is as severe a punishment as anyone could have expected; in all candor, it likely exceeded the consensus prediction. USC is likely to hemorrhage recruits because NCAA bylaws - as provided by The Bylaw Blog - give athletes more freedom of movement if a school's period of bowl-game ineligibility is prolonged rather than limited.

As you can see, the reality of a two-year bowl ban would naturally have an exponentially greater (negative) effect than a one-year ban. It will possess far more reach than a one-year ban and change the minds of numerous USC football recruits. It's impossible to think that a substantial player exodus WON'T occur now that the two-year bowl ban has been handed down. When one also considers that USC did self-impose a ban for the recently-concluded basketball postseason, the two-year bowl ban raises eyebrows. Fuller statements and explanations (at press time, late Wednesday night and early Thursday morning) have yet to emerge, but when details pour out on Thursday, it will be interesting to see what the NCAA came up with. It's widely felt that this is a penalty commensurate with a view that there was a complete lack of institutional control at USC. It's a little hard to believe that contention, given the difference Pete Carroll has made in the lives of his players. The program did fall victim to the siren son of success in a city that is intoxicated by glamour, and Carroll certainly wasn't the vigilant steward he needed to be while agents and moneymen zeroed in on Bush and Jarrett. However, one recoils at the idea that USC was a runaway, renegade program on par with Southern Methodist in the 1980s. That's a bit much, to say the least.

We will have to see the official summary and the full report from the NCAA.  What is important that the NCAA cannot back down from this in any way or shape. They will lose all credibility as an organization around the country, if they even show signs of blinking in the continued display of Trojan petulance and hubris.

According to Wolf, the NCAA didn't add to the self imposed penalties on Just$C basketball program. Well no one cares about that joke of a program really except for the few dozens who show up at Costco Center on a regular basis. I do think OJ Payo was just the tip of the iceberg when it comes to Timmeh's reign in Southern Cal. Then again, like I said who really cares about Trogan hoops. No one.

Going back to football don't get excited right away about the loss of 20+ scholarships in 3 seasons. Let's see how the NCAA spaces them out. If it is just loss of 7 scholies per year so that Kiffin can bring in 18 players instead of 25, then it makes it difficult on Lame but not that big of a deal. However, if the scholarship reduction is spaced out in a way so that it directly counts against the 85 player limit on the roster and phased in over 3 years (i.e.  10 scholies in first year, 7 in second year and then 5 in the third), then it would be something noteworthy.

We will also have to watch out for whether the recruits are given options to back out of their scholie commitments. I don't think they are but we will have to look for that. In terms of transfers, we would think all the sophomores and juniors in that team should take a real hard look at that option because they are not going to play for much in next two years under a "head coach" who cannot win even 40 percent of his ball games.

For now I will end this graf from Scott Wolf:

USC coach Pete Carroll was among those who attended the hearing and his legacy will undoubtedly be tarnished by the penalties. Carroll maintained for the past four years that he didn't think the NCAA would harshly punish USC.

Yeah, Petey. Let's say this to you real slowly. We know Coach John Wooden. Many of us were fortunate to meet Coach Wooden. You are officially now a cheating scumbag, who should never be mentioned by anyone sane and cogent in the same breath as Coach Wooden. It will be fun to see you getting exposed as nothing but a glorified substitute teacher in the NFL.